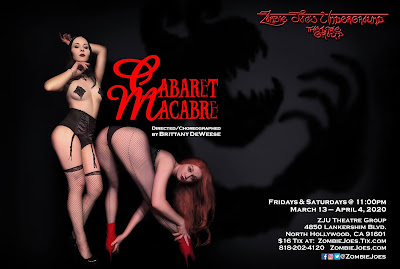 This wonderful dance show from ZJU will return when theatres re-open.  In fact it will indeed have two more performances (see below)!  When they do, allow me to recommend this lovely, dark, funny cabaret show.  In this case the name Cabaret Macabre says it all, really.

Brittany DeWeese (the redhead on the cover) choreographed/directed this collection of dance pieces as well as performing.  Laura Van Yck (she of the raven locks on the postcard) acts as hostess, channeling some blend of Morticia Addams and Marilyn Monroe with a liberal sprinkling of Dita Van Teese.

Now, given the name and design of post card, I did sit down with some expectations.  Vague ones, to be sure.  Probably some spooky/halloween songs while gothic ladies performed a series of stripteases..  And yeah, I kinda/sorta got precisely that.  With an edge.  I happily report however the performers gave more than expected.

For one thing--men.  Two male performers, Chris Andrews and Michael Baker, sporting both the looks and the talent to dance some amazing performances, usually with their female cast-mates.  Sometimes on their own.  They did not strip, but then hardly anyone did.  Rather, what we got were dance/movement vignettes.  Vignettes that  really worked--entertaining, a bit shocking, a tiny bit thought-provoking.

One of my faves had a man and woman with two goblets, one of whom was poisoned, and their elaborate dance on and around the table, constantly switching goblets on each other until both downed the contents at one time!

There was more, including more than one time members of the audience found themselves taking part!  But while yes, this show had plenty of lingerie and flesh showing off amid artful teasing, what I really walked away with was the broad-spectrum joy of entertainment on a host of levels.  A pastor using a woman as his pulpit, until she turns the tables on him.  A man descending from boyfriend to animal.  One final striptease which ends with a hilarious bit of body horror!

Kudos to all involved, pictured below--those not yet mentioned include Taylor Alyssa, Lindsay Chase and Darian Stranix.  All photo credits belong to Laura Van Yck. 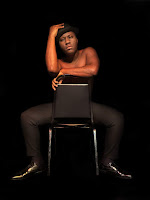 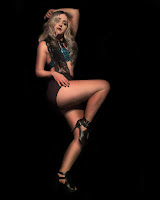