Remember Hugh Hefner's t.v. specials?  What about the spy films of the 1960s and 70s that seemed really so very silly yet entertaining at the same time?  Well, you might realize the blending of these two was something our cultural zeitgeist needed, but behold...!

Okay "need" might be a bit strong.  But Rod Roget's Celebrity Nightcap fits this niche and it works with startlingly entertaining results.  The "pets" in this case don cat ears instead of bunny ears or a tail.  Every one of them proudly proclaim a lot of educational credentials along with their measurements and opinions about anal.  Our host is Rod Roget (Warren Hall), an over-the-top caricature not so much of Hugh Hefner but an image he himself represented--the playboy uber-capitalist a la Tony Stark but minus the genius.  At least this one has a social conscience, in that he eagerly sets his Pethouse girls to solving a murder.  On live t.v. no less.  With not entirely legal results.

Hot tubs can be dangerous kids.

The Pethouse girls are the real stars of this, and that each one comes across as a vivid character in her own right is half the reason this show works, frankly.  Gwen Rocakatansky (Olivia Friloux) for example is the tall Amazonian head of security.  Helen Waters (Liz Mina) claims to speak 17 languages--and this proves true!  In fact, part of the fun of the whole show is that the seemingly outlandish claims of the Pethouse Girls turns out to be nothing less than accurate!  Thus they end up redefined as a superheroine team with a feline-based set of costumes!  With the help of the robotic Petputer everyone combines their talents to examine all clues in reference to the murder of Eloise Barnes (Abbygail Williams) fiancee Tom (Jason Britt--who also doubles as a drug-soaked movie director and guest of Rod Roget's show). 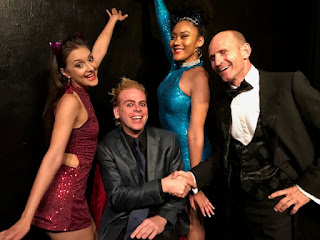 Crucial to it all is Mandy Pennysnapper (Robertha Mallmann) who uncovers a vital clue and so becomes Pethouse Pet of the Year--in a quick ceremony where the character has a brief, delicious breakdown wallowing in neurosis about how everyone sees her and this will show them!  Her rival Ruth Goldfarb (Victoria Saitz) helps lead the girls into a martial-arts based combat with...well, it is funny and wonderful but I don't want to spoil it.

You have to watch the show, and laugh at it, to find out.