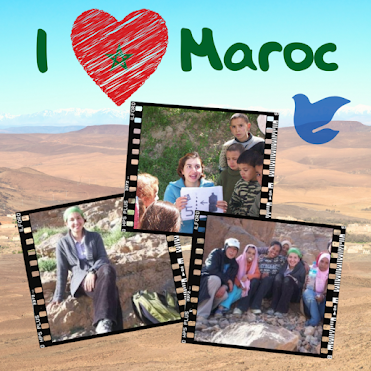 The Hollywood Fringe Festival is back and I've seen one of the first shows!

I Heart Maroc is a one person show written and starring Azo Safo,  I have personally known Azo for a few years and was frankly astonished at how much I learned about her in this piece.  Never had a clue she spent two years in the Peace Corps, living in a small Morrocan village.  But more than those bare facts, interesting they may be (and are), what I really got out of her show was how this experience shaped and taught her.

Solo shows remain popular at the Fringe for often purely logistical reasons, and generally they fall into two groupings.  One is a naked exposure of some kind of trauma or pain.  The other shares wonder and joy learned, a delight kindled amid life lessons.  Sometimes the two blend.  I'd clearly say this one falls into the second category, helped in raw showmanship by Safo's marvelous characterizations and humor.  We can see her acting out how the people she knew (and recreates) impacted her enough to become who she has become today.  Honestly, I felt not only touched, but honored.  Which brings me to the one specific fault I can find.

This show is too short.  At roughly forty five minutes I seriously believe it could and should be expanded to twice that.  One can feel the material off stage as it were, eager to jump into the follow spot and shine.  I am left with an aching sense of what else I don't know about my friend, and about this interesting young lady I only thought I knew.  She lived there for two years--and I'm certain lots more stories, lots more moments to touch the heart and stir the imagination, remain to be told.  Hopefully she'll get around to telling some more.

I Heart Maroc has only two more performances--Sunday the 15th at 3 pm and Sunday August 22 2021, at 10:30pm (which can be viewed virtually).  I recommend highly you do not miss out!