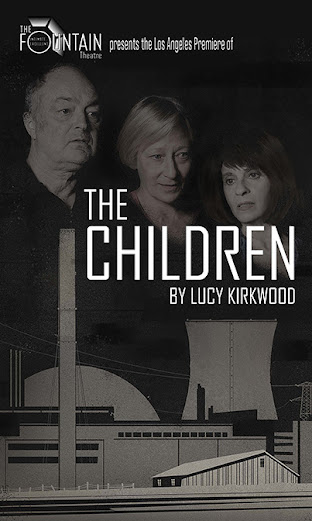 A cottage on the coast of England.  There lives an elderly couple, Robin (Ron Bottitta) and Hazel (Lily Knight).  An old friend stops by, pretty much unexpectedly, named Rose (Elizabeth Elias Huffman).  They all used to work together years and years ago.  All three are nuclear engineers.  Retired, now.

Seems so domestic at first.  Or, almost.   Catching up.  Sharing a few stories.  Some awkwardness.  Plus some resentment, about what we will learn.  Eventually.

But one of the earliest lines gives this play its title.  "The children?" asks Rose of Hazel.  Just how poignant that question proves as bit by bit we learn a context.  The nuclear generator nearby, the one where all three friends once worked, is now at the center of an Exclusion Zone.  As in Japan, an underwater quake or landslide triggered a huge wave, one that came crashing down and flooding the reactor.  The backup power was in the cellar.  No way to activate all the last-ditch safety protocols.

A nuclear disaster, in other words.  So...The Children.  Lucy Kirkwood's just under two hours traffic on the stage, set in the wake of a disaster that has changed everything.  And have forced some elderly baby boomers to re-assess, re-evaluate.  Their own personal demons come back to haunt, to gnaw, and to demand if not some exorcisms, at least some kind of response.

Which could come across as dreary beyond words.  Instead, it remains entertaining, often funny, consistently compelling, and sometimes life-rattling.  Especially when Robin and Hazen finally learn why Rose is here.

Debates emerge, to be sure, but mostly amid the way these three very different people--different yet bound together with chains of memory, past mistakes, shared hopes and accomplishments, and pain--interact with one another.  More, script and cast (under the direction of Simon Levy) breathe life into these people, such wise fools all three, such elderly, deeply experienced children.  The almost drab, uber-ordinary details of their lives eventually emerge as more.  The bells of the vanished village that stood here in medieval times.  The cows that somehow survived the initial dose of radiation.  The broken toilet, even.

It was like a poem, one bringing laughter and tears, then eventually getting past that.

Because there is so much at stake, really.  Nobody wants to talk about that.  Well, who would?  Except...the children.  Not just the individual offspring of our couple.  Everyone younger than them,

It it weren't for the children, they could go on pretending.

One more word about Jen Albert, who worked as both fight and intimacy choreographer for this production.  She did a very fine job, and that fact those were her titles might give you yet another clue as to the range of this excellent play (how the hell Harry Potter and the Cursed Child beat this our as "Best Play" on Broadway is frankly an indictment).