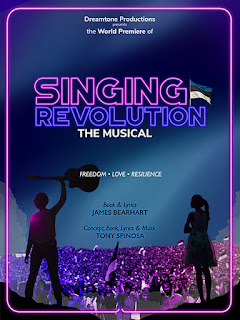 Estonia.  Odds seem good you don't know where it is, or even that it exists at all.  For the record, it is one of three "Baltic Republics" at the western border of Russia, conquered centuries ago and then re-conquered twice during WWII.  Today it is an independent nation.

I knew that much going into the theatre to see Singing Revolution, a brand new musical (hopefully) on its way (eventually) to Broadway.  The time is 1988, as the Soviet Union begins to crumble away, and Estonians want their freedom, to become an independent state once more, and celebrate/encourage that desire in song!  Central persons as this works its way out are two couples--Taavi Tamm (James Everts) and Sofia Solokov (Bella Hicks), as well as Leena Rebane (Krista Feallock) and Victor Kuznetsov (Lucas Alifano).  Plus Tavvi's mother Mia (Renee Wylder) and Sofia's father Nikolai (Michael Scott Harris).

Both these couples are mixed, i.e. Russian and Estonian.  Which helps make their stories very much a part of the grander, historical tale--and gives the international conflict a human set of faces.

Everyone in the cast is doing a superb job.  They all act and sing and dance very well, all of them remain in character at 125% energy leves throughout.  All during the show--but especially during the second Act--I felt genuinely moved, so much so there were moments I wanted to look away out of discomfort for the pain these people were enduring.  Likewise many times I felt warmed in my heart, almost to the point of tears.

Clearly, I enjoyed myself.  A lot.

Yet let me issue a few critiques, which seem appropriate so you as an audience member have a full picture.  One may seem subtle but isn't really--I left the theatre knowing only thing about Estonian culture that I did not know going in, namely the colors of their flag.  For all the characters talk about Estonian culture, how much it means to them, how it is under threat, etc. I walked away with nothing about it.  Imagine seeing Evita and having no sense of Argentina.  Or Fiddler on the Roof sans any detail of what it was to be Jewish.  Yes there was some great stuff in the program and the press release, but who wants to do home work to "get" a musical?  Also, frankly, much of music sounds the same--not because the tune or lyrics are that much alike but because they all end up sung in a virtually identical style, i.e. belting every note.  No ballads (that sounded like ballads).  No simmering songs that build tension to set up a scene or conflict.  Instead every single song sounds like a pop anthem a la "We Are The World" or "Fireworks!"

But I don't want to take away what is just lovely and enjoyable.  The songs are (mostly) very good and none of them are bad.  All the performances, from those mentioned above to the rest of the cast--Anthony Marciona, Peter Van Norden, Adam Wylie, Emily Abeles, Melanie Au-Yeung, Lacey Beegun, Mitchell Lam Hau, Thomas Hollow, Brandon Kallen, Marissa Ruth Mayer, Chet Norment, Brandon Keith Rogers, Kelsey Lee Smith, and Michael Swain-Smith--perform with gusto and authenticity.  There is never a dull moment.  The entwining of personal stories and world-shaking events is done skillfully, even movingly.  I just think the show needs some tinkering to be its best.

You may disagree.  Either way, I hope you'll give this show a chance.