Werewolves? Well, there was the short-lived series Werewolf, but that had more in common with The Incredible Hulk or The Fugitive. And She-Wolf of London, which frankly is better left forgotten. Quentin Collins on Dark Shadows, Oz on Buffy, etc. Not too bad a line up.

Let us also turn to recent portrayals. The upcoming motion picture New Moon not only features a bevy of very attractive young men who sprout fur, fangs and claws but the advertising campaign is clearly intended to make the most of this fact. Indeed, the "lead" werewolf in the movie had to buff up to retain his part. The biggest problem with these lycanthropes is that they don't really retain much of the danger that seems proper for the whole idea. Whereas vampires in Stephanie Myer's books are too dangerous for words (even if the Cullens themselves are relatively pacifistic), her werewolves retain their full minds. Barring accidents, they really aren't that dangerous at all. Not

so with the upcoming remake of the The Wolf Man with Benecio del Toro and Emily Blount. The trailer clearly captures the idea of the female lead in love with a man who has become a ravening monster hunting her. While not exactly a prototype for totally functional relationship, this is interesting and exciting and (let me honest) at least to some extent sexy.

A similar flirtation exists in an independent trilogy of werewolf films about a pair of sisters, titled Ginger Snaps, Ginger Snaps

Again, and Ginger Snaps Back (this last is a prequel taking place circa 1750). All three have a sensual air about them, with the idea of sex simmering under the surface. Most obviously this is true in the first film, when a changing Ginger begins to practically put boys into heat by walking down the hall, and again in the second when Ginger's sister is desperately trying to ward off her own transformation while avoiding a male of the species who wants to mate with her. 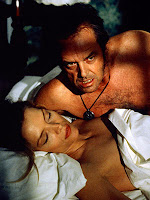 Nor should we forget the under-rated Wolf, in which three of the finest actors on screen end up in what could be described as a werewolf triangle of sorts. This, like other sexual depictions of the werewolf, goes with the idea that there's something primal these creatures stir up in others. Not necessarily evil, but untamed and so uninhibited. Amid all the sterility of good manners, rigid protocols, rules against telling the truth and a clinical approach to marriage as well as coupling, the werewolf can be an avatar of pure, unfettered LIFE.

Technically, it remains a bit tricky to have too many portrayals of werewolves for two reasons: (1) The special effects are expensive. For a vampire all you need is pale makeup and some fangs. Werewolves are a much more elaborate proposition for someone looking at a budget. (2) The usual "trappings" of werewolf stories tend towards formula--woe is me, I'm a monster, can somebody stop me from hurting others, etc. Not a bad idea, really, and full of potential, but less obviously so than the vampire.

I should also point out that a little bit of research turned up some steamy romance novels that use werewolves as a background. Rebecca York has written a whole series centered around a werewolf detective. I found a whole list of romance novels involving shape-shifters, including those of the lupine variety. There's also Blood and Chocolate by Annette Curtis Klause, Racing the Moon by Michele Hauf and Lauren Dane’s Cascadia Wolves.

And I frankly find encouraging that Jack and Diane, a film about lesbian teen lovers one of whom happens to be werewolf, is now in pre-production.

Oooohhh, this is a good post. Yeah, I think that the New Moon wolves, with their chest-baring photos, are trying to sex-up the otherwise safe series (especially the veggie Cullens).

I read somewhere that Ginger Snaps, at least the first one, actually used the werewolf transformation as an allegory (is that the right word, I can't think right now, sorry!) for a female going through puberty. Changing at the moons and all. So sex would feature in that, as puberty is the maturation of the sexual organs.

I think anything dangerous, such as werewolves and vampires, can be linked to sex (which has sometimes been considered the ultimate danger of all -- don't get me started on the whole 'sex as the original sin' theories!

Werewolves have definitely been neglected, but I have a strong feeling that's changing.

The Wolf Man sounds quite good. And Ginger Snaps was pretty cool.

I love werewolfs and think they're getting sexier. The New Moon wolves will set the standard (Jacob - wow). On the page, Anita Blakes wolves (ie., Richard, Jason, etc.) should raise the bar when we see them on IFC next Spring. And, Blood and Chocolate - very sexy wolves (not traditional were's but loup garou -- close enough).

Love your blog song and I'm not a Madonna fan. ;-)

Bestiary Parlor: The Musings of a Zoologist Turned Author said...

I love werewolves. The beast within. I created The Wolf Maiden Chronicles because of my passion for both wolf and werewolf lore. Not only do I write novels about them but I also lecture on werewolf and wolf lore. After Werewolf Sanctuary, my novels are 'werewolfhistorical' novels. Howling about the new Wolf Man movie.