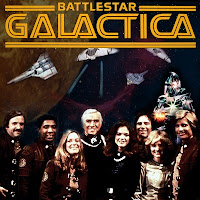 I only recently became aware of this debate going on, pretty much captured in The War on Science Fiction and Marvin Minsky, a blog entry that also writes glowingly of Dirk Benedict's essay Lt. Starbuck...Lost in Castration. Essentially, both are complaining (and using the re-imagined Battlestar Galactica as a prime example) that science fiction is becoming less masculine and more female-oriented. Interestingly, this is regarded as a "bad thing".

Frankly, I have trouble taking Mr. Benedict very seriously when it comes to understanding what makes a good story. In the 1980s he performed the lead in Hamlet in NYC, and I had the...experience...of seeing that show as well as reading his disparaging comments about other productions. His costume rather resembled that of Flash Gordon, and his delivery indicated no hint of what people like Laurence Olivier, Richard Burton, Kenneth Branaugh and Kevin Kline (my personal favorite) saw in the role or the script. The sword fight was great, though. And (not coincidentally, I think) the Ghost was done as a special effect, with lights shining around the theatre and a voice booming from the sound system.

But I digress. Both writers make what seems like a very curious set of arguments -- about gender roles, about science fiction and about story-telling in general. Please feel free to read them via the above links, but in a nutshell here seem to be their main points:
No one should be too surprised to read I question pretty much all of the above premises. A lot. 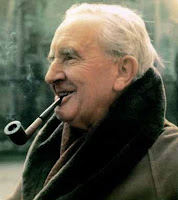 One level it is really too easy to tear apart these ideas. For example, any viewer of the new BSG would be hard-pressed to call Commander Adama anything but a very strong man in pretty much every single way. But I'm more concerned with two specific ideas that run like currents in both the above posts.

Let us deal with the more hidden idea. My own experience and study has led me to believe most people who give any thoughts to art tend to see its purpose in one of two ways. J.R.R.Tolkien spoke of such when he wrote of preferring "history" to "allegory", a remark many have used with which to compare Lord of the Rings with the works

of his friend C.S.Lewis The Chronicles of Narnia. My own preference is to compare Shakespeare with his contemporary Johnson on this matter. For lack of better terms, I call one the Givers of Answers and the other the Askers of Questions. Another way (perhaps more accurate) is to note one approach is to view art as propaganda, the other seeing it as an experience. One poses questions only to feed you the answer. The other poses questions but gives responsibility for finding the answer in your own hands.

Good fiction needn't belong to only one of these two schools. The storyteller can even be a little heavy-handed and achieve considerable quality. Case in point (and returning to science fiction),

Blade Runner. The story posits a terrible injustice (not coincidentally, at least IMHO, one similar to the very heart of the new Galactica), namely that mankind has created synthetic people -- with feelings, thoughts, free will -- and made of them slaves. Ultimately, there is little ambiguity here. The Replicants (as they're called) are victims of an insidious evil. Even if you consider every violent act they commit totally unjustified, it takes someone strangely dense not to see them as wronged (the only person I've ever met who didn't "get" that was an engineer -- make of that what you will). Decker, the title character, is a murderer many times over. What makes the story so compelling (apart from fine acting, a dizzying production design, etc.) is that we see him learn better. It is the story of a leopard who changes his spots, not in a remotely saccharine manner (he doesn't let a bunch of dangerous and violent Replicants simply get away) but by falling in love with one. The Director's Cut underscores this even more.

Now, examine the same idea but without taking it seriously. In Star Wars two of the most 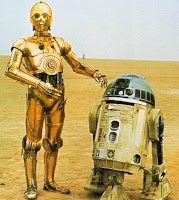 popular characters are R2D2 and his golden companion C3PO. Yet how much is made of the fact that both of them are exactly as much slaves as the Replicants? Both film trilogies are supposed to be epic struggles to defend/restore freedom to the galaxy -- yet not for droids. Machines don't count, no matter how kind or intelligent or even loved. It doesn't even occur to anyone in any of the six films that mechanical life should perhaps have a choice -- not even to the machines themselves.

Those who want to see simple morals in their stories too often end up demanding simplistic ones. In efforts to find ethical answers, they cheat on the test. One can go at great length (and many have) about the weird moral implications given by George Lucas -- and such is justified due to his explicit efforts to present a fable. It comprises a major, oft-repeated criticism of the films. I've read published books on the subject. Critics of Blade Runner, on the other hand, often complain about some of the very things which defined the re-imagined Galactica. It is too dark. The hero doesn't have clean hands. It it depressing. The end doesn't see what is wrong with the world corrected.

Here is my take. Those complaints are about the real world. Life is breathtaking in its beauty, and mind-bogglingly horrible in its ugliness. Not one or the other. Both. Individual people contain wisdom and stupidity, compassion and cruelty, bravery and cowardice. Want a story that involves us on many levels? Capture that dichotomy. Take an idea, and explore it seriously. Yeah, make it a ripping yarn but remember every video store in the world is full of formulaic action films that couldn't sell tickets.

The Boy Who Cried Wolf is a simple, easy-to-comprehend tale with an important lesson. Aesop remains a classic precisely because he knew how to tell a fable well. But no one equates Aesop with Sophocles. It isn't somehow manly to act like the world is a video game. It is only boyish -- embarassing to see in a grown man. Boys think everything can be fixed with right gizmo, that girls are yucky, that an explosion equals excitement and that tears are something of which to be ashamed. Men have grown beyond all that -- and as a result, do far more good and experience far more joys than boys ever can.

Boys also whine when they don't get what they want. Let us be fair -- so do girls. Men and women learn better.

Revisiting childhood can be loads of fun. The journey and vacation can be therapeutic. Living there full-time is a tragedy. Even for Flash Gordon or Luke Skywalker.

Or Lieutenant Starbuck.
Posted by Zahir Blue at 9:53 AM

There was actually an article about the new Star Trek movie, and how Kirk was essentially a spoiled boy, and the women were props -- Uhura going after an emotionally-unavailable Spock, instead of someone who would respond to her. I think that Joss Whedon's Firefly presented well-rounded characters who were strong, sensitive, and interesting and didn't fall into a stereotype.

And Blade Runner -- one of the best death soliloquies ever, and so true. Decker points out that Roy Batty just wanted answers like the rest of us, and didn't want all his memories to be lost in time like 'tears in rain'. A great movie, and the flawed hero made it all the better.

Don't think I'd agree about Uhura in the new TREK. Spock was clearly very available, to her and to few others.

My own take on Batty's end is that he ultimately chose to make his exit as something other than a killer, and sharing what he'd learned.

I wish I could find that article, but I read it way back in May (was it really that long ago?) and I just can't.

I have to disagree (respectfully, of course) -- in the end, Spock chose the Vulcan way wherein he would suppress his emotions. Even that scene where Uhura kissed him, he didn't seem to be into it.

But I still enjoyed the Star Trek reboot and would go see the sequel!

I feel compelled to point out that Spock at that moment was trying to deal with the murder of his mother which had occurred before his own eyes minutes before--along with the destruction of his homeworld coupled with the near-genocide of his entire species. Yet he was in command, so giving into his grief (which would be extremely painful) was not an option. Uhura understood that, and what I saw in his eyes was an intense gratitude that she did.

And FIREFLY (as well as SERENITY) was great. The true heir of both FARSCAPE and BLAKE'S SEVEN.