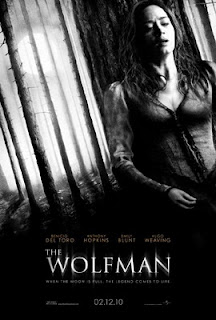 Just got home from seeing The Wolfman, the first remake of the classic 1941 movie which created much of the now-accepted "lore" about the man who "becomes a wolf when the wolfbane blooms". Evidently the whole flick is a labor of love by and for its star, Benecio del Toro. It makes for a sweeping update of the story, beyond perhaps what was really advisable in the end.

But that sounds more harsh than intended. In truth the film has a few problems but almost entirely matters of nuance. For example, the character of Gwen (Emily Blunt) leaves the Talbot estate early in the film. In and of itself that makes sense, but since she exits and comes back two more times, it would probably feel smoother if she hadn't left that first time. As said, a nuance. Somewhat more problematical (but also more justifiable in terms of plot) is what almost (but not quite) feels like a detour to London.

What is good about the film? A whole lot, honestly. Cast, including Sir Anthony Hopkins and Hugo Weaving, were uniformly excellent. When you think about it, the lead characters in this film are an extraordinary bunch. Laurence Talbot, estranged son of Sir John Talbot (their different ethnicities explained via Laurence's Spanish mother), does something that sounds brave. In real life, my own reaction would be to run if a monster showed up, ripping people around me limb from limb. But I did believe this Laurence would indeed grab his rifle and act. Just as I totally accepted that Gwen would bring a total focus to her situation, acting with the kind of loyalty and courage she does indeed display. As a writer, I do accept that the foundation of nearly any good fiction film is a superior script, but without good actors to bring it to life those words on a page stay there.

In the original, Claude Rains is the uncomfortable father of Lon Chaney Jr. (a full 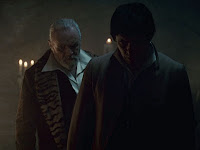 head and half taller). Yet Del Toro and Hopkins could easily be related. More, this Sir John (presumably a baronet) is a more specific character--a big game hunter and world traveler who has turned the beautiful Talbot Hall into his den, an almost fetid lair instead of a home. We get details to explain the nature of the estrangement between father and son--details unpleasant but logical. More, we can see in Laurence a child of this particular parent, but a better and in the end braver man.

I will admit the flick has a lot of red herrings, of which the biggest is the presence of Gypsies. In the original, they were the source of the first werewolf to appear. Not so, this time. The medallion of the mysterious Saint remains a secret (although methinks maybe Laurence's brother might have begun to suspect the truth). Hugo Weaving's character, a Scotland Yard Inspector partially suggested by Frederick Abberline (of Jack the Ripper fame), seems a tad under-used. Frankly some of the criticisms of his part I've read make no sense. He does not, in fact, believe in werewolves until he sees one transform in front of his own eyes. Up until that moment he clearly assumed the killer to be a madman.

Yes, the flick is gory. I've seen worse, much worse. Myself, I don't much care for gore. But it didn't bother me. The pace at the very start was almost disorienting but made increasing visceral sense as the story went on. I was suitably impressed by references/homages to classic werewolf movies of the past, including The Werewolf of London and Curse of the Werewolf. And I found myself vastly intrigued about what might have happened if Gwen and the Wolfman had not been interrupted at the very end.

Methinks the movie has also created at least three options for a sequel:

1. The Inspector was bitten by the werewolf and lived. When next the full moon rises...
2. Gwen must might have been scratched with the werewolf's teeth there at the end. Again, upon the next full moon...
3. It is almost too easy to see some nascent coroner performing an autopsy and removing that silver bullet from Laurence's body...

I also had problems with this movie. It was entertaining but definately could have waited for it in dvd.

I rather enjoyed the experience, enjoying the references you have pointed out as well as the American Werewolf in London moment. Not that I would call it the greatest film ever but it was nice to see proper Gothic sensibilities in the movie theatres.

Then I realised it was an awful rip off and my heart fell ;)

I disliked all the trashy, gory mayhem, but I was very impressed by Gothic trappings and the fact that, gasp, they really had written characters - ending between werewolf and Gwen was effective!