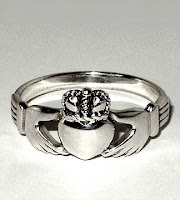 Behold my entry in the AW February 2010 Blog Chain. This month's subject--Love.

Love stories in our culture are everywhere. Orson Scott Card in his excellent book Characters and Viewpoint made the point that when readers see two characters meet (usually of the opposite sex), they instantly render a judgment of whether these two make a likely couple (with advice to the effect of "be aware this is happening"). Likewise, anyone who has delved into the world of fandom should be aware of 'ships (as in "relation"). Fans so very much want certain characters to get together, whether such ever happens in the story or not. Spock and Kirk. Harry and Hermione. Buffy and Faith. Every now and then it even happens (see David Tennant's swan song as Doctor Who).

So writing a love story seems a pretty necessary skill in a fiction-smith. And not that many succeed, at least in my opinion. But then, I suspect my own ideas shape this perception. What many call "love" seems to my mind more akin to "coupling," that is, a pair of folks who form a kind of deep friendship that crosses the line into partnerhood and sex. Not a bad thing. Not at all! Quite delightful, in fact! But such does not meet my standards of what in The Princess Bride is defined as a reason to go on living. Think Cyrano and Roxanne. Aragorn and Arwen. Dekkard and Rachel. Dracula and Elisabeta. Willow and Tara. Susan and Maude. Eli and Oskar. Anne Elliott and her Captain Wentworth.

I'll admit it--when it comes to love I'm a softy in some ways. One of my favorite movies is Love, Actually. Another is A Mighty Wind with the melancholy, sweet tale of Mitch and Mickey at the beating heart of that film. Likewise, I adored the idea of giving the title character a love interest in How The Grinch Stole Christmas. I witnessed the blossoming (albeit rocky) romance between Ron and Hermione with pleasure, and remain fascinated by the pain-born passion between Thomas Covenant the Unbeliever and Linden Avery the Chosen.

More--and herein I get very personal--I have been in love. Before her untimely passing, my darling Colleen agreed to become my wife and to this day I regard myself as a widower. I literally needed to be medicated in the years immediately following. Only within the last six months have I even begun to think of women "in that way" again (and with profoundly mixed feelings).

Colleen fascinated me. We shared many but not all of the same interests. We made each other laugh. We enjoyed many of the same things. We both felt intense pleasure at the other's joys, and horror at any pain or sadness they experienced. If given a choice between my duty and Colleen, my choice would have been instantly in her favor. She was the missing piece of my heart, my soul. And without her, I feel maimed.

All of which sounds like the most over-the-top hyperbole, but happens to be true. I adored her. I still do. Her eyes and smile haunt me.

Capturing something like that in terms of writing proves daunting. Dozens of little hints can and do exist to help. One I like is the zodiac. Regardless of how you feel about calculations vis-a-vis birthdates and the like, a good book on the zodiac describes personality types with great skill. Frankly, not all the images make sense to me. So I make my own. Instead of Cancer (a crab) I think of someone being a Turtle. Bear feels more appropriate to me than Bull. Virgos become Unicorns, and so on.

But what makes the biggest difference, at least in my own writing, is some leap of the imagination that seals these two people together in some way.

One love story I've got on the back burner at the moment has its origins a few years back. It really has as its primary image a barely pubescent girl spying on a very young man (five years her senior) swimming in a pool at night. He doesn't know she's there. She hasn't met him, but knows who he is. And she instantly falls in love.

Another I'm working on (with a partner) began as a theoretical idea--a female vampire falling for human male--and then followed some images. They meet on a train, rather like NYC's subway. I frankly saw her initially as Felicia Day, with him as Elijah Wood. Initially, like I said. But what really clinched it for me was a simple phrase: A young soul (the vampire) meets an old one (the human).

Which in my mind makes crafting a love story rather like writing a poem--because it takes more than simply have the meter right to make the thing work.

Lovely post, very heart-warming. I'm so sorry about the loss of your lovely wife, Colleen. The way you describe her is love personified. (I'm quite partial to that name, myself.)

And I like your female vampire idea. Get going on that please.

I cannot imagine life without my love. :( I am again saddened for you, but her memory lives on and for that I am grateful. Love all your parings, too! And you are so right that the reader/viewer DOES want those to happen. Brennen and Booth on Bones, for example. ;) Hint Hint to ABC(?) :) A beautiful post David!

I love this, your writings are so cool, and your writing about
zodiac personalities and giving your own interpretations of the zodiac signs used. This is so much fun for me. Thank you for sharing. Please keep up the fantastic writing. My web site link is above if anybody wants to check it out, its all about the zodiac signs.

Wow, thanks for sharing this with us. I really enjoyed reading your post. I have to admit, I'm not a romantic at all, but reading this I can now see a little better the appeal it has to people. :)

Thanks for the lovely post and I look forward to your vampire book. Sounds like a unique twist and I love paranormal :)

Very emotional and beautiful writing about your love Colleen. And I have to agree with Freshhell above. Better to experience strong feelings than not experience any at all...