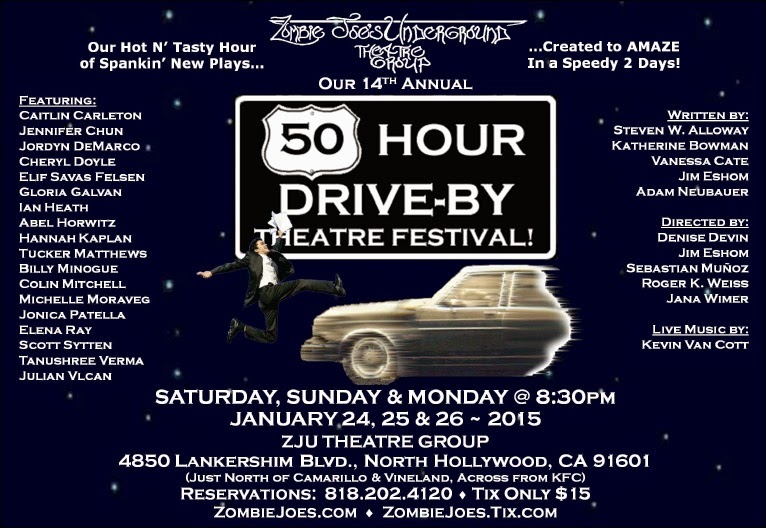 ZJU's 50 Hour Drive By Theatre Festival entered its 14th year this week and the five plays that emerged premiered last night. The whole idea seems a blend of brilliance and lunacy.

On Thursday, Jan. 22, five writers pick three props each at random. Half an hour later, at the very same moment, each writer literally puts pen to paper. On Friday, Jan. 23, finished scripts are turned in! That evening the actors assemble and begin rehearsals with final tech/dress the next day.  On Saturday Jan. 24, the five plays have their first performance!

Like I said, equal parts genius and insanity! With startling, vivid, raw results.

Meet the Susans by Katherine Bowman (directed by Jana Wimer) began the evening. The premise here remains just this side of surreal, i.e. very odd but perfectly possible.  Three soldiers named Ed Johnson turned out to be married to three women named Susan (Elif Savas Felsen, Tanushree Verma, Michelle Moraveg).  All three Susan Johnsons live together while their husbands are out in the field.  On one Susan's birthday, a woman from the army (Caitlin Carleton) arrives with a very unpleasant bit of news--an envelope announcing an Ed Johnson's death. But which one? Much of what happens next is all about the three Susans not wanting that envelope opened. Not yet. Like most (really, all) of the entries this was a dark comedy, and to be frank needed the most polish. On the other hand, it flowed naturally and entertained while offering genuine but logical surprises throughout. Kudos!

Patient 99 (written & directed by Jim Eshom) is a weird dystopian vision of the future, in which a girl from our time (Hannah Kaplan) is held prisoner until she releases the voice of the savior contained in a ball, which she refuses to do. Believe me, it is odder--as well as being a lot funnier--than it sounds. The doctors overseeing the 'patient' (Jordyn DeMarco and Ian Heath) finally bring in her sister Dahlia (Cheryl Doyle) to try and make her save them all.  This playlet, like the first and to be honest one other, almost screams for expansion--and to be honest the climax didn't quite work because of timing. I'm sure with a little more rehearsal they'd've nailed that (timing is like that--it sometimes needs a bit more time).

Half of Infinity by Steven W. Alloway (directed by Sebastian Munoz) was very nearly my favorite of the evening, in no small measure because the cast proved so excellent (Gloria Galvan, Elena Ray and Colin Mitchell).  Essentially a riff on Frankenstein, it deals with an awkward mad scientist trying to build a dream woman with the help of a female assistant who clearly adores him.  It was very sweet, and has IMHO the makings of a very lovely short film or longer play.

The Original by Adam Neubauer (directed by Roger K. Weiss) might actually count as the single weirdest playlet of the Festival. Which makes for something of an achievement! Not that I'm complaining!  It follows three weird people--two men and a woman (Tucker Matthews, Abel Horwitz and Jennifer Chun) in search of someone horrible, a vicious mass murderer who somehow had numerous clones (Billy Minogue) made. Their hunt and the dynamic between them looked potentially very interesting and certainly grabbed my imagination, but didn't quite gell in the end.  Of all the plays in this year's Festival, this one I felt most needed expansion (as opposed to simply could be expanded to very good impact).  It seemed most dreamlike and surreal.

Forever by Vanessa Cate (directed by Denise Devin) actually made me laugh so hard I cried.  Like many a truly hilarious comedy, its humor comes from the stuff of tragedy.  A woman (Jonica Patella) meets two men (Julian Vlcan and Scott Sytten) she hasn't seen for ten years.  She loves one of them, always has.  Likewise one of them is deeply in love with her--and the third is in love with him.  A triangle not of mutual desire but mutual requited devotion, a closed loop.  This should be tragic! In fact, it is tragic, but coupled with some very sharp wit it instead becomes so darkly funny I had trouble breathing by the end.