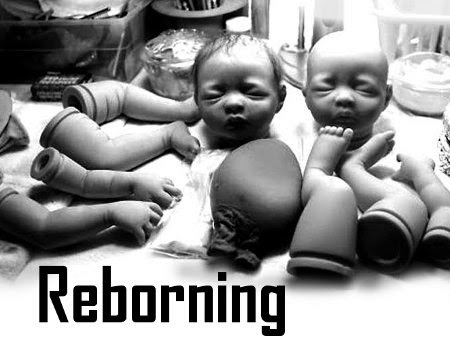 When stepping into The Fountain Theatre (near Normandie)  to see the play Reborning by Zayd Dohrn I really didn't know much of what to expect.  Frankly, the subject matter is one that made me blink a few times.  "Reborning" as a movement refers to the creation and caring for hyper-realistic dolls of babies.  People's motives span a wide range--from a fascination with the craft, to a deep interest in dolls, and even recreation of actual babies no longer with us (hopefully, but not always, grown up).

Kelly (Joanna Strapp) makes such dolls.  She lives with her boyfriend Daizy (Ryan Doucette) and as the play begins has a visit from one of her newest clients--Emily (Kristin Carey), whose little girl died suddenly over two decades ago. Not bad people, nor at first particularly compelling. The situation intrigues more than what we initially know about these characters.  But that changes with all the relentless inertia of a tide.  At first we find Emily odd, not only in her desire but also her insistence on something more in her doll, something yet lacking.  Kelly meanwhile feels driven to fulfill her client's needs, despite feeling embarrassment at the older woman's praises.  The more we get to know Daizy, the more we realize despite (or more likely, because) his status as the "normal' one he's the one who understands least events.

Consider for a moment--why would anyone want such a doll? What compels Emily to this desire?  More importantly, what is it she doesn't see in the exquisite creation fashioned by Kelly?

the trash) and subtle (her judgment of her foster parents proves a bit chilling).

Yet--she doesn't remember any of this happening.  Why is this so personal to her?  Why does it hurt so, so much she wont' even consider talking about having children of her own?  Secret, little-understood wounds end up as something of a bond between artist and client, which the boyfriend finally comes to understand (partially due to a quick tongue lashing by Emily--"All you have is a dinghy...you're no help, you can't even swim!")   But this when these two women meet, ultimately the way they seem to rip open each others' scars leads the way to something far more valuable than understanding.

Both start to heal.

Director Simon Levy chose a fine cast for this deeply individual drama which delves into such powerful material.  In fact watching their performances I found only one wrong note in the entire play--not even a wrong note such as a missed beat. A tiny nuance indeed.  Mostly I saw a believably distraught young woman whose individual torment seemed precisely that--individual rather than general.  Strapp never came across as vaguely uncomfortable or superficially upset.  Her pain felt specific, even if I lacked maybe every single vital detail.  Doucette might easily have made out of Daizy a thick-skulled asshole, yet instead he gave the audience a brash but nuanced character.  Just as Carey's Emily remained a troubled but accomplished person facing something she herself only understands in part--roiling currents under a seemingly placid sea.

That one wrong note?  A beat I would have preferred at the climax, a little more time taken as Emily realizes--not mentally but on a visceral level--what it is the doll of her long, lost daughter lacks to make it seem real. Pain.

But that is a very tiny nuance, amidst what I found a fascinating story enacted before me.  One powerful enough I found myself independently arriving at the same paranoid theory as does Kelly--although in my case I cast it off in face of some cold evidence.