Ghosts of the Underground (review) 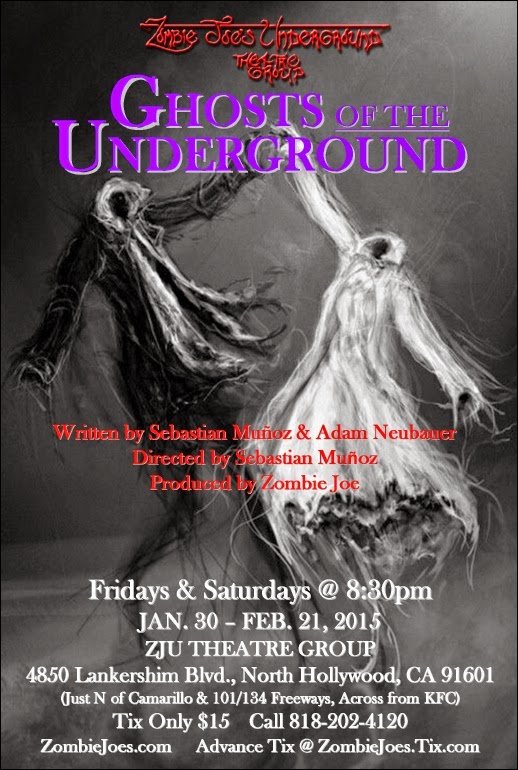 Halfway through Ghosts of the Underground's opening night, I had the strongest sense of deja vu.  Not simply because I recognized about half the cast, nor because I've attended many a show at Zombie Joe's.  No, my imagination summoned up a series of silent movies.  Doctor Mabuse, Nosferatu, The Cabinet of Dr. Caligari and M. The words "A German Expressionist Musical" kept echoing inside my skull.

And that is what this show turned out to be.  A German Expressionist Musical.

If you don't know what German Expressionism is, go to YouTube and do a search of the above titles.  Just do it. Now.

Walking into the theatre, a different space greeted me than usual.  The lobby had been transformed into part of the stage, including a several piece band (Sasha Snow, Ramona Creel, Michael Guthrie). The theatre proper lacked chairs but already held the cast, white of face and stylized of dress--holding position until one of them--a kind of Gypsy (Sue Shaheen)--played her taburine and all would shift.  Then the story began, of a Detective (Ian Heath) and his neglected Wife (Sara Kessler). A strange hooded figure in a mask murders her and the Detective relentlessly pursues her killer.  Through the community, evidently in the midst of some kind of Carnival, he goes.  His only clue, the mask.  He finds a Woman who has a similar mask (Nicole Craig) and the man who made it (Emilio Andrade), questions the woman's Husband (Benjamin Warren) and the Whore he frequents (Olivia Spirz) as well as a Reporter (Mark Hein)  who's been following him, and a seductive Clerk (Heldine Aguiluz) who knows more than she should about everything.  Meanwhile a Police Officer (Jahel Caldera) follows the Detective throughout.

One part murder mystery, another part fantastical odyssey, with more than a dash or two of Kurt Weill tossed in, the story unfolds with as something not quite a nightmare but not your usual dream either.  Given the title, I found myself wondering how many of these characters were already dead.  In time arriving at an answer, in now way am I sure it correct.  Rather than criticism, this makes for high praise.  Never did I stop feeling intrigued as well as (just as important) entertained--no least by the music and almost-dance of the show.  As noted before, this qualifies as a musical. And kudos to Sasha Snow as musical director, just as much as to directors Sebastian Munoz and Adam Neubauer (listed as well as the writer).

My one complaint--if it can be called that--was how much I wished the show were even longer, more elaborate, in a larger space with a bigger audience.  Several characters simply never had the opportunity to move into the foreground--like a hulking Brute (Steven Alloway) who always captured my eye, and various others making up the story's tableau (Courtney Drumm, for example).  To be sure, this does make for cheerful, light fare.  Ghosts of the Underground (have fun contemplating the meaning of that title) delves into the shadows of life, of perception, of our beliefs in what we truly are.  All the meat that made German Expressionism so powerful a genre--a warning echo of the tumult that was to come. How entirely appropriate the story has no names, but plenty of masks.  Professions but not families, not really.  People die in this story so very easily--and the fact audience blends with cast in terms of space only makes that fact more eerily powerful.