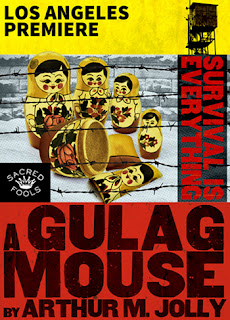 The word "Gulag" refers to the brutal forced labor prison camps of Siberia used by the former Soviet Union. Under the circumstances one might expect a play titled A Gulag Mouse to be quite grim. Nor would you be wrong!  Playwright Arthur M. Jolly took one of the worse places human beings can exist and crafted an extraordinary story from that place. A tale of five women trapped, desperate, hungry, angry, terrified and also terribly alone--even when surrounded by others in the same situation.

Anastasia (Emily Goss) has had a relatively privileged life.  Note that word "relatively."  Because at the end of the second world war, faced with her war hero husband entering her life once more, she killed him.

Sentenced to the Gulag, she soon meets the other prisoners in a windy wooden shack.  Masha (Kimberly Atkinson), big and tough and perfectly willing to hurt others out of spite--who weirdly (or not) feels she belongs here. Lubov (Heather L. Tyler), once much prettier than she is now but with enough looks to degrade herself with an officer, thus suffering less in some ways--an unforgivable offense in some eyes.  Svetlana (Crystal Keith) has seemingly turned all her emotions 'off' in order to survive. No malice there, but no compassion.  Or is there?  Then there is Prushka (Dana DeRuyck), sentenced to ten years for telling a joke she refuses to repeat, who has the nickname "Mouse."

But picking up clues rapidly give way as the story unfolds, as the fierce, unofficial but merciless rules the Gulag play themselves out.  There is never enough food.  Weakness brings instant attention. They are trapped in a frozen wilderness dozens of miles from shelter, surrounded by guards and dogs.  Only the strong survive here to be released.  Few prove that strong.

And yet--what is strength?  How do you measure power when everything conspires to keep you weak? How far might anyone go? How much will they risk?

I will frankly say this play surprised me throughout--which remains one of my favorite experiences in theatre.  Everything made sense, though.  As time went on, and new surprises emerged, the importance of so many tiny details became increasingly vivid. But the script is dead words without the actor.  Every single person in the show proved a marvelous actor, up to and including Brandon Bales in the double role of Evgeny and Ivanov, both small yet utterly vital.  Director Danielle Ozymandias likewise achieved marvels.  First and foremost she cast the play!  I know from experience that is three quarters of the job and she did that part magnificently!

But more--and this oddly enough is where many directors do sometimes fall--she clearly kept the pace right.  Rhythm is weirdly important in life as well as art, and even the business of maintaining tension amid silence forms a huge part of that.  It engages us on a visceral level, breathing life into what is frankly a truly extraordinary set of words strung together.  This is a performance that will remain with you, I promise.