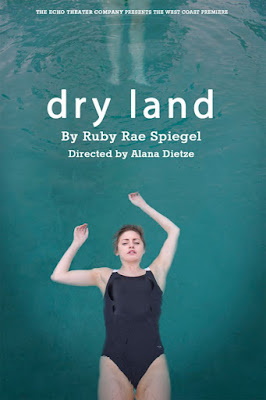 (Heh heh...give the title that is kinda funny)

Let me begin with the title.  Dry Land by Ruby Rae Spiegel.  Seems two ways to interpret that.  The story deals with members of a high school girls' swim team.  Specifically, between a friendship that grows between two of them -- a very close, powerful bond in the end, between two girls who in some fundamental way heal and soothe each others' loneliness. So is the dry land that sense of emotional isolation, with the water functioning (as it so often does) as emotional life?  Or is dry land a haven from the currents and depths and unpredictable but heartless weather that waits out at sea?

One point of high praise I'd like offer this script is the suggestion the title means both.

We begin with Amy (Tegan Rose) chatting after school in the pool locker room with Ester (Conner Kelly-Eiding).  The former seems a bright, pretty popular girl who for some reason has decided to hang out with the latter.  At first we think they might already be friends.  Soon that seems not really true. Not yet.  Also, Amy keeps demanding Ester punch her in the stomach.  Hard.  No, hard!  Harder!

Doesn't take too long to figure out why.  Or why she's insisting on asking a relative stranger to help.  For that matter, Ester's willingness to help her out even in such an extreme act seems crystal clear from the start.

Now, at this point let me point out something else I adore about this script.  Some have heralded it as "an abortion play" but to me that makes as much sense as calling Who's Afraid of Virginia Woolf? a "college play."  Not exactly inaccurate, but doesn't get at the heart of what's going on.  Abortion ends up one more factor some teenage girls have to handle, pretty much on their own.  Along with peer pressure, fear of the future after high school, self esteem (or self loathing), sexuality, the temptations of power and so on.  The issue of abortion never really gets mentioned directly but simply exists as part the characters' lives.

Which would be pretty meaningless without a cast bringing honesty and humanity in massive doses to the stage.  Between the two I suspect Kelly-Eiding has the harder task, simply because Ester turns out to be simply (or not so simply) good.  She is not without issues or secrets or insecurities or a temper.  But she comes across virtually from her first line as someone who in the pinch will try and do the right thing--i.e. to act with compassion, to help.  This part of her heart frankly remains on her sleeve--making her an obvious choice for Amy.

Amy in turn pretty much embodies that old analogy of truth being like an onion.  Layer after layer, most of them lying--often to others, often to herself, often (but not always) to both.

In essence there are only three other real characters in the play, at least whom we actually meet. A group of team members show up at one point, but they really are little more than the equivalent of spear carriers.  Which is fine and they do a good job of it.  But Jenny Soo as Reba--Amy's supposed best friend but from whom she conceals the truth fiercely--shines simply because she's given just enough to serve as an avatar for the shallowest part of high school society.  She is present at the scene that made me genuinely squirm--an act of deliberate cruelty by Amy aimed with not a shred of good reason at Ester.  Reba doesn't bat an eyelash.  But then, even from her walk we knew she wouldn't.

But the characters of Victor (Ben Horwitz) and the Janitor (Dan Hagen) also give their actors a chance to shine--and like the rest of the cast, they do so swimmingly.

Sorry, I literally could not resist!

Without going into too many details, Victor and the Janitor do a nice job of showing the world is not so hopeless as Amy clearly feels (or fears) it is.  Whatever else they might be, including awkward, they prove the world is not high school.  And maybe that subtle point is what is most needed for the audience.  And most of all, for Amy.  This work is an open ending.  We do not really know what the future holds for these characters--no more than we can say for certain about ourselves.  And I found myself praying a little bit for Amy, the popular one, the pretty one, the oh-so-desperate one.