The Archer from Malis (review) 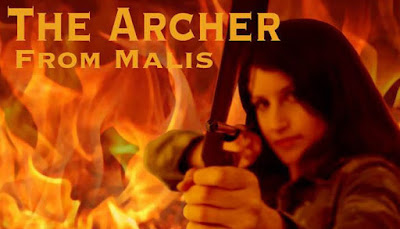 Interesting, how in such a theatre-heavy burg as this one (400+ theatres and counting) certain patterns start popping up.  Last Halloween the sheer number of vampire plays startled me!  Right now I'm starting to see a fair number of works based on Greek myth.

In this case, the Griot Theatre dove into the great epic of the Trojan War which to them was rather like the Bible plus Star Wars.  The title character of The Archer of Malis (adapted & directed by Malik B. Al amin) is Philoctetes, friend to the great hero Hercules and inheritor of his great bow (think Excalibur and you've got the right idea). 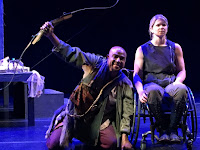 Without going into too many details, Philoctetes for reasons of convenience was marooned on an island en route to Troy, by the order of Odyssea (made into a Queen for this version, one of many non-traditional points of casting, to great effect).  After a full decade, the betrayers of our hero have returned, warned by an oracle only Philoctetes and his bow can conquer might Troy, thus ending the war.

Herein we get into what fascinated me most about this play, even more than the uniformly fine performances.  Although we often portray Ancient Greece from Disney cartoons to sfx-laden films to cult t.v. shows, we nearly always get it wrong.  Very wrong.  Because our world view is so in variance from theirs on so many levels!  We see the Trojan War as a huge stupidity that cost oceans of blood for no good reason.  But the Athenians who watched the ancient tragedy of Philoctetes saw that war as justified.  War was glorious!  Pride was to be avenged! 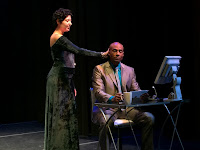 Nothing shows this more than two details.  For one, the central character as we see it is not the wounded betrayed warrior who rails against pitiless fate--against whom he has no ultimate defense--but rather Achilles' child Neoptolemus. This individual has chosen to help Odyssea trick Philoctetes out of his bow.  Neoptolemus feels wracked by guilt and the play focuses on their decisions rather than the ostensible "hero."

Second, whereas in the original Hercules is a deus ex machina, this play places both he and Zeus (his mother in this version) on stage, commenting and effected by events.  That a god intervenes to prevent the worst of tragedies, and does so at peril, alters the feeling of the play profoundly.  It feels more in tune with the modern, yet harkens back to why Sophocles' version remains an inspiration as well as actively performed piece over two thousand years after it premiere!