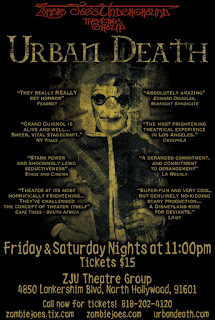 Affionados of ZJU in North Hollywood make up a group well aware of that company's perennial performance art piece about death and horror.  Urban Death is always strange, disturbing, funny (if your sense of humor tends toward the dark) and in some sense moving.

But every single iteration remains itself, exploring subtly distinct aspects of death and fear and obsession. Every time, new vignettes make their appearance while old favorites often end up re-invented with some kind of twist.  Previous performers arrive or leave.  Fresh meat...er, faces make their debuts.

First, I would compare it to last year's edition.  I can still recall my genuine shock at some of the scenes witnessed at that time, but also my feeling the shock (and yeah, at times the nausea) seemed invoked for its own sake more than anything else.  Okay, that is fair and appropriate.  This time, I would say the show proved less shocking and more unnerving.  My eyes did not turn away so much as they stared with a kind of horrified fascination.

Second, I will note a fair number of new cast members this year.  Singling out individuals seems slightly out of sync with the whole idea of this ensemble piece, but also because a lot of the time I've zero idea who is on stage (unless a very specific body type stands out).  But many faces I did see were new, and seemed very much to dive into the whole macabre atmosphere this piece builds upon.

I want to touch on an interesting difference this year--a matter of focus.  In the last few versions, many of the shocks came from our reaction to a scene that appeared shocking or gross.  This time the horrors carried with them the idea of a character being trapped in some kind of personal Hell.  For the record, methinks this is somewhat more "classical" in tone.

Along those lines, I will also say the whole show this year included the return of certain set pieces, with many new faces and as such feeling fresh again.  Some of these haven't been staged in two or three years, while new bits have been added to fit into that whole "Personal Hell" theme I picked up upon.

More, this year's images and scenes don't features so many "ends" as UB sometimes dwells upon.  Relatively fewer deaths for example, one way or another, but lots of situations in which someone clearly is (and feels) totally trapped and without hope.  Yeah, we get the voices in the dark and a shocking apparition here and there (some of them with all the subtle nastiness of an abcess in your mind) but this year the climax of individual terrors seems to rest of some realization.  Usually.  Not always.

The last thing Urban Death strives to be is predictable.  Hence part of its very real power.