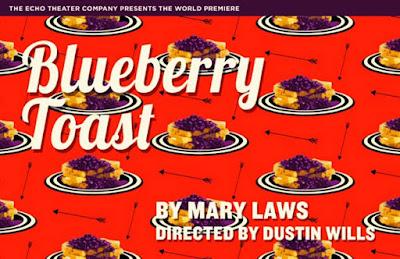 When something horrible happens, all sorts of options await about how to react.  Tears, dumb-struck horror, rage for revenge--these are but a few.

Blueberry Toast by Mary Laws (directed by Dustin Wills) at the Echo Theatre Company invites the audience to participate in a different direction.

Walt (Albert Dayan) and Barb (Jacqueline Wright) are a married couple in what sure seems like suburbia, with a dazzlingly bright kitchen in which they decide to have breakfast one Sunday morning.  While their two precocious children Jack (Michael Sturgis) and Jill (Alexandra Freeman) are in the other room quickly putting together an existential play in several acts, a seemingly innocent question is asked.

What do you want for breakfast?

Oh dear god.  The horror and chaos that erupts from that query!  Not caused by, mind you.  Clearly the tension inherent in this marriage have been building for oh such a long time, probably years, and been forced below the surface of day to day life, building pressure until finally...

Not all at once, of course.  Walt asks for "blueberry toast" for breakfast.  You probably guessed that already.  When Barbara makes him such, however, he insists what he asked for was blueberry pancakes and refuses to soil  his fork with the disgusting food his bride has lovingly prepared for him.  She at first accepts this in with remarkably cheerful patience, getting out the pancake batter and the various implements for making pancakes.  Walt meanwhile talks about how much he hates poetry (he teaches English poetry) and wants to get into Oil.  Plus of course there's a neighbor he wants to help fix her sliding glass door.

The exchanges between them grow increasingly frought.  He regales her with bizarre details such as the fact he bought a gun to kill her on their wedding day--out of love of course.  They play an odd kind of sexual game, which frankly starts to get more than a tad steamy--until Jack and Jill run in to do enact the latest act of the existential play they're writing.

And every moment, it all gets more and more intense, more and more absurd, more and more violent.  Imagine a dream in which all the stress of a genuinely unhappy marriage boiled over like a volcano.  Yeah, that's not enough.  Too mundane.  Too easy-to-expect.  Instead, we get an every wilder roller coaster that should have made us feel...well, just terrible.

Instead we just laughed.  Loudly.  Often.  With ever-increasing glee as things got more perverse, more bloody, more vengeful.  Walt just will not eat his wife's blueberry toast, no matter how many times she cuts him.  Nor will she make anything else for breakfast until the guy just tries a taste of the damned blueberry toast!  Just one bite!

Honestly, I felt so sorry for the folks who have to clean up the set afterwards.  It was like I Love Lucy a la Quentin Tarantino, almost. My jaw kept dropping, and I just kept laughing!

So did everybody else!