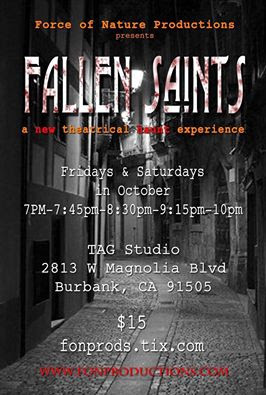 So what is the style of Fallen Saints, the new haunted house/maze/experience from Force of Nature Productions?

Which I find quite refreshing.  More Crimson Peak and Penny Dreadful than Friday the 13th or Hellraiser.  Or at least that seems to have been the idea.  The execution proved not to be a bullseye but neither was it a miss. It was all very fun, but a tad unfocused.  On the other hand, I saw this on a preview night when cast and crew were still fiddling and tweaking with it.  So as you read further, please keep in mind I have not experienced the final product.  So take every single word with a grain of salt.

The premise is that we are invited to a seance, held in the same building as a mortuary whose creepy proprietor (Wyn Harris) welcomes us with questions as to our health, age, height, etc. Honestly he comes across as a character right from those old horror comics of the 1970s, complete with his tale that some people claim to have seen the ghost of blind child playing the violin (Anatol Felsen) wandering the establishment.  He passes off the guests to a scientist (Gloria Galvan) cackling at her collection of trinkets and body parts.

Here we get a major clue for those seeking the same.  She eagerly shares a letter "From Hell" and the piece of liver it came with.  Certain folks--such as myself--will instantly recognize this as one of the most famous clues to emerge from the Jack the Ripper case of 1888.

And here is the sort of weakness I detected in the whole event.  This wasn't really exploited or set up very effectively.  How many "got" that clue?  I cannot say, but it seems certain not all knew enough to recognize that note.  Likewise, the sense of place wasn't particularly firm.  Was this funeral parlor near Whitechapel, where the Ripper stalked and ripped?  Are we supposed to expect to see more ghosts?  If so what might their stories be?

Bears mentioning this was a preview.  So this might all be fixed.  I've seen vast changes between a preview and an actual performance!

It also bears repeating the individual parts of the show all worked, all made for genuine spooky entertainment--which after all is the point!  I'm just being nitpicky about why what I experienced received a C+ when I wanted to give it an A.

Also, despite the warning, I'm not giving it all away.  I'm hoping you go see the show and enjoy yourself, so there's a limit to the spoilers allowed.  For that reason I'm not even going to mention what roles Kirstin Maxie, Steven Alloway, Tom Jones, Donna Jean Siegel, Adam Shows or Vincent Miller play in Fallen Saints.

But I will note that Michelle Danyn does play the spiritualist whose seance we eventually attend.  We were led into the chamber, where she sat still and quiet within what looked like a circle of salt.  Not until everyone had arrived, did she speak or explain her efforts to contact those who had not yet passed on.

The whole first part of Fallen Saints was literally a build up to the seance, making it the centerpiece.  As might be expected, part of what followed did indeed harken to the murders of Jack the Ripper, easily the most (in)famous of Victorian London's crimes.  An inspired choice for writer Andy Schultz (whose comedies I've praised here before) and director Sebastian Munoz to pursue.

My (perhaps unnecessary--remember they were still making changes) advice overall is to do a bit more in the creation of atmosphere and pacing.  I would for example have the "From Hell" letter read aloud.  And just generally give a bit more backstory, a bit more time for the atmosphere to seep in.

On the other hand, I enjoyed myself, and given this was the first performance I'm utterly sure everyone that followed was better.