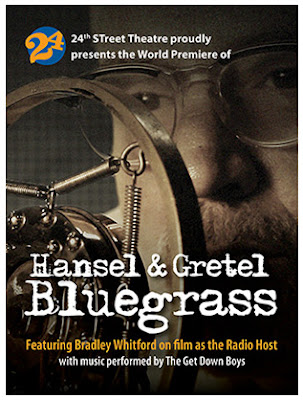 Fairy tales, like children's stories (maybe especially children's theatre) tend to be tricky.  Ursula K. LeGuin once compared writing for children with raising them, in response to someone assuming such would be "simple."

Hansel and Gretel Bluegrass maneuvers around the pitfalls with great skill, not least in rendering a medieval German folk tale celebrating peasant cleverness into a more contemporary setting, turning it into a story of familial love in the face of all kinds of darkness.

In this re-imagination, Hansel (Caleb Foote) and his sister Gretel (Angela Giarratana) are a little older, on the threshold of puberty, with the natural bickering that entails.  Both deeply distressed over the loss of their mother, these two Appalachian children in the Great Depression get caught up in the backlash the coal mine where their father works shuts down.  We never see this father, instead having a narrator called Duke (Bradley Whitford) relate this storv via the radio.  Seems he got a letter from a little boy, complaining about how useless his little sister was.  This story consists of the Duke responding--and one of (very) many lovely nuances lies in the feeling this is somehow personal.  I walked away thinking maybe the Duke was Hansel, all grown up.  Or perhaps their father...

Their father, desperate to give his children some chance, some hope, gives in to a kind a madness in his despair.  Feeling he can do nothing for them, he abandons them in the woods in the hope that someone--anyone--might find his son and daughter to give them the succor he cannot.

Someone does, a weird and blind old Mountain Woman (Sarah Zinsser) who lives in a cave.  Perhaps a witch, perhaps a psychic, maybe a ghost or just someone so removed from the world she has in some way left reality as we know it behind.  Bryan Davidson's script never makes it clear, so we remain unsettled as well as subtly frightened of her.  First and foremost she remains strange, subtly cruel, very manipulative and yet in a way gracious.  Her desires seem focused on hearing Gretel sing for her.  Why?  I'm sure the actress has a shrewd idea but I can only guess, although that desire remains believable throughout.

She lures the pair to her cave--which seems like a nice house to them--and begins her ways to degrade the brother and ensnare the sister. Director Debbie Devine with the cast makes a fine job of balancing the unreal and the believable.  The set design by Keith Mitchell in particular helps, because while solid somehow everything also seems insubstantial.  Shadows created by Dan Weingarten's lights interplay with the layers of and colors of the set, so the same stage easily becomes a shack, a forest, a house, a cave.  That slippery reality--which many of us experience now and then--is where this production dwells.

And where tragedy is so narrowly averted.

Indeed the whole play creates the feel of a dream that might just come true, or perhaps arise from a memory of strange events.  Like a child, I felt drawn into a world both real and mythic.  One of my favorite experiences and nearly always only found in live theatre.

Listing all the wonderful ways this play and production explores and creates it world could take a lot longer than anyone wants to read.  Suffice to say, the dread and danger rises to Hansel and Gretel's souls--echoed in no small part by the sounds (Chris Moscatiello) and music (Megan Swan), the latter capturing that melancholy sense of courage and emotions so perfect in part through the Get Down Boys.  In the end, instead of the overt oven and cages of the folk tale we get a trap of the mind, coupled with a fiercely cold danger in a rainy night in the mountains, as two children end up defending themselves from a knife-wielding blind woman.  What happens next?  We do not know.  That, it seems, is another tale--and to paraphrase a novelist "while life goes on, this chapter has come to its end."  And I applauded with a lot of enthusiasm.