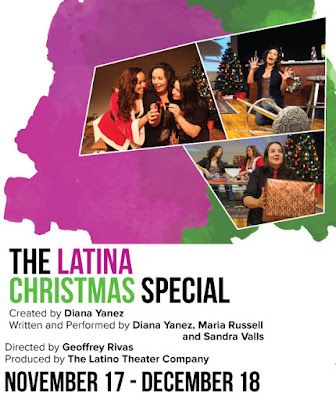 What is Christmas all about?  In fact, it seems unlikely more than a small handful of people would ever agree on one answer, but here's one many can see--Christmas is very often about memories, especially ones involving your family.

The Latina Christmas Special at LATC returns with a deeply entertaining exploration of memories, of three Latina women--best bestest friends--spending Christmas together.  They get a little drunk, they dance, they share stories.  Eventually they start talking about Christmas growing up, about their families (especially their mothers) and these are the ones shared most explicitly with the audience as well as each other.

In that respect, the show ends up a bit of hybrid.  Half a play, half a stand-up routine--the latter the kind involving stories with a funny/bittersweet and very moving climax.  Evidently, in this case, based on the lives of these three performers--so it cannot really be done the same way ever without this specific cast.  (This show goes back at least to 2014 and this year marks its second time running in LA's LATC).

Maria Russell begins, in her Christmas suit showing plenty of leg and cleavage.  Gorgeous and knowing it (in part because of the absolutely unbounded support her mother gave growing up), hers tale comes across as the most...well, odd.  Not bizarre, you understand, but just unusual enough to make one wonder.  Yet at the end, the curiosity recedes into appreciation.  Curvy enough to attract the nasty comments of other children, one feels Maria's almost cocooned family life left her both more vulnerable to such yet at the same time with the defenses needed to meet them.  Plus of course her mother's unwillingness to allow anyone to bully her beloved daughter!  The details seem eccentric--like the way her mother still disapproves of Maria having left home to marry the man she loved--yet also natural.  One ends up feeling a bit envious of what seems pretty clearly a very happy childhood, an extremely loving  home, a wildly successful marriage as well this unashamed (yet very generous, even loving) Diva.

Diana Yanez tells her story of growing up in Florida, the child of Cuban refugees whose parents bear some of the emotional scars of that upheaval--such a certain fierce materialism.  Diana has loads of stories to tell, about the family's encounter with a huge flying cockroach (Note: Having grown up in Florida, I can tell you every word brought up memories) as well as her first hint about Santa Claus' true identity.  Here's a hint--it has to do with buying on sale.  Still, we walk away with a lot of affection as well as laughs.  Because if we are lucky, our families do create that safe and happy place for children--at least enough to remain in our hearts for all the days that follow.

Which brings us to Sandra Valls--tiny, gay and the one in whose home the trio have gathered.  Early on, they mention the holidays as hard on her.  Now we find out.  Again, much of it stems from her mother.  Honestly, it feels a little heartbreaking then bittersweet as she relates year after year Christmas presents from her mother that can best be described as "girly."  Sandra is not girly, and as the slide show (the whole performance includes a lovely bit of multimedia via designer Yee Eun Nam) demonstrates she never, ever could be called such.  So every year, Sandra's presents from her mother ended up given to Sandra's sister.  But--in this household family presents were for Christmas Eve, with Santa's opened Christmas morning--the next morning would be totally appropriate gifts!  What many would call "Boy Toys."  Only in retrospect does she realize her mother did see the real her--but obliquely.  Years and years later, as her mother slowly died from a disease that wasted her away, Sandra took care of  her, which in turn led to an epiphany.  A profoundly wise, gloriously comforting one--and which I think you should see the show itself to appreciate.

Geoffrey Rivas directed this show to capture exactly that--the way memories weave themselves into our souls, and how Christmas becomes a time for those memories to emerge, offer comfort as well as truth.  He and the cast succeeded enough I felt wrapped up in their stories, as if those memories were mine.  What more could we ask for, really?

The Latina Christmas Special plays Thursdays, Fridays and Saturdays at 8pm and Sundays at 3pm until December 18, 2016 at the Los Angeles Theatre Center, 514 South Spring Street, Los Angeles CA 90013.
Posted by Zahir Blue at 8:46 AM