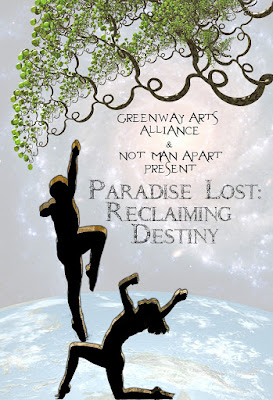 Not Man Apart and its members created three of my top dozen shows of 2016.  Now they offer an all-movement multimedia adaptation of Milton's epic poem, titled Paradise Lost: Reclaiming Destiny.  As you would expect the work covers the creation of the Cosmos itself, including Earth, the "birth" of the Son of God (Zachary Reeve Davidson), the rebellion of Lucifer/Satan (Jones [Welsh] Talmadge), then the temptation of Adam (Leslie Charles Roy Jr.) and Eve (Alina Bolshakova) which results in the world we know now.  Well, that is in the title after all.

Two aspects of the show I want to really talk about and praise.

First, the actual production which proved spectacular as usual.  As ever the entire cast showed not only talent but physical training to a very high degree, but now backed up byextraordinary multimedia.  Not only do we the audience see amazing images dance across the stage and set, but the cast interacting with those images!  One of my personal favorites involved Satan emerging from hell, then leaping from world to world until he finds Eden!  Fantastic!

Second, though, must be the story itself and how Milton's epic emerged into a new form--with, frankly, some welcome changes.  For one thing, the poem's misogyny never popped up.  For one thing, we see not only God the Father (J-Walt Adamczyk) with a wave of some kind of wand bring stars and worlds into existence, but the God the Mother (Marguerite French) at his side.  The Archangel Michael (Anne-Marie Talmudge) as well as other members of the Heavenly Host are played by women, just as Eve is given a far more central role than in the original.


But what really impressed me most how much of the story's symbols and unique features emerged crystal clear in performance.  Of course as Satan rebelled a female figure seemingly appeared on his back, raven haired and sheathed in red.  Who could this be but Sin (Laura Covelli) herself.  Once they coupled a darkness appeared from them, at first amorphous yet even before he took human form I realized this must be Death (James Bane). Must be!

Which means of course because the ideas and characters remain so vivid, the situations so clear, the disturbing questions about the narrative remain intact for us to ponder.  Why for example were Adam and Eve not warned by the Trinity or any of the Angels (Kendall Johnson, Elisa Rosin, Joseph Baca III) about Satan?  Why did they not intervene?

Meanwhile, why could they not simply be forgiven?  I don't think this a weakness.  Encouraging the audience to think and question seems to me a virtue--one of many in a piece that seems like one the company will return to, again and again in years to come.