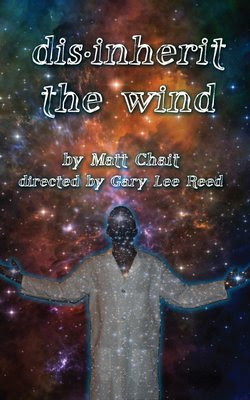 I feel strange writing this.  Disinherit The Wind (the title is a sly reference to the famous Pro-Evolution play Inherit The Wind--one of several) is a polemic about the relationship between science and spirituality, with an emphasis on how the two can live side by side.  It attacks pure materialism, while eschewing anything smacking of fundamentalism or Creationism.  But it also rejects Darwinian Evolution.

Now, most of this is actually my own point of view as well.  I also see the universe itself as the manifestation of a transcendent consciousness of which we are a part.  I see no inherent conflict between my faith and science.

Disinherit The Wind tells a moving story, one that centers around some fairly esoteric questions of evolution, biology, genetics and other sciences.  The fact such seemingly dry fare becomes a source of fascination and passion marks one of the play's great strengths.  It urges, encourages, almost makes audience members think!  Which is nearly the highest praise I can offer.

Dr. Bertram Cates (Matt Chatt--the playwright and owner of the Complex Theatre) is our protagonist--a neurobiologist fired because (he claims in a lawsuit) he disagreed with Darwinian Evolution. Financially he defends himself while the University has prominent attorney William Brady (Ken Stirbl) assisting Dr. Jared Brown (G. Smokey Campbell).  The only witness Cates has on his side is graduate student Howard Blair (Stephen Tyler Howell), engaged to Dr. Brown's daughter Melinda (Renahy Aulani).  One can see how the case cannot help but strum the strings of conflict, also the real battle happens in Act Two.

That is when Cates confronts the University's prime witness--Dr. Robert Hawkins (Circus-Szalewski) a very thinly veiled version/parody of Richard Dawkins.  Since all this takes the form of testimony before not a scientist but a judge, both debaters are forced to make their points in layman's language--which sometimes even strays into the poetic.

Juicy stuff.  It works  I feel for the characters, and the rest of the audience felt for them as well.  More I was so involved in the debate my urge to enter into it, making a point, needed stifling!  Wow.  Well done!  Entertaining, moving and thoughtful--as fine a trio of adjectives as most plays could hope for!  And totally deserved!

So why do I feel strange?  Especially since I essentially agree with the protagonist in what after remains a play with a great big MESSAGE delivered pretty explicitly over and over again?

Well, I don't think he succeeded in making his case.  Not in the way he claimed, anyway.  Frankly Hawkins is set up as a straw man, the authoritative voice of the opposition.  And he comes across as very intelligent, very arrogant, very unwilling to consider any world view other than his own--to the point where he storms off rather than even talk with Dr. Cates.

Frankly that feels like cheating.  I wanted to step on stage and take his place--specifically because I do agree with Dr. Cates and wanted to hear him expound on important things such as punctuated equalibrium, and alternate definitions of life, and other matters.  The play presents the question of evolution and beginning of life as in any way related--they are not.  The latter is an infant science and anyone who confidently claims ideas common before I was born as current thinking--as Hawkins does--of course comes across as a fool.  The playwright set up his voice of dissent to fail.

Of course that also makes for a good story, so in a way I cannot blame him. It helps as well the whole cast does a fine job--including Lon S. Lewi, Tony Cicchetti, Caroline Simone O'Brien and Christina Hart. All of which adds up to an almost startlingly good piece of theatre, a theatre of ideas that (and this makes for very high praise) fuels serious thought on the part of the audience.

So despite my whining, this remains a good play and very compelling production.