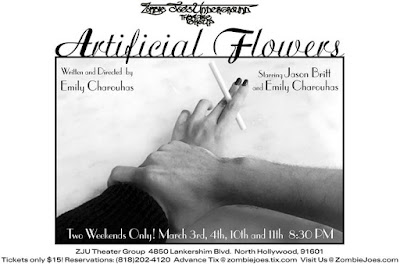 One genuine pleasure (and to be honest, worry) in writing theatre reviews is seeing the premiere of original plays.  Usually, at best one can call such works still in need of some re-writing.  Sadly, sometimes we see vanity projects that make one cringe.

Artificial Flowers on the other hand steers clear of those fates and makes its own.

I walked into the theatre a bit nervous.  For one thing, I saw the cast consisted of only two people.  More, one of them, Emily Charouhas, also includes the credits of writer and director. A few facts soothed my nervousness, one being her co-star Jason Britt, an actor I know and admire very much.  For another, the writer/director/actor Charouhas I've seen and thought quite good.  I even saw--and very much enjoyed--a ten minute play of hers last month.

What followed essentially consists of a long conversation in the middle of the night.  Maeve (Charouhas) comes to see Phelix (Britt) as she evidently does every few weeks.  They met via some dating site, a nicely ironic fact given their acid-tongued personalities. Both are writers.  Both clearly feel something for and with each other.

The two characters get together now and then for company and for sex.  On stage, biting, scratching, nakedness, pleasure and pain ensue.  Presumably the sex is more of the same.  But that gives you a clue of how riveting Artificial Flowers proves to watch.  To be sure, the script is a challenge because it presumes the characters extremely articulate, capable of maintaining really fierce concentration for a full hour.  Fortunately, in this production that proves exactly the case!  Good thing too--without that (and compelling characters) this would be deadly dull.

Instead, it proves fascinating and disturbing from the get go.  We've likely all seen some kind of relationship like this from the outside at least--very often the result of at least one person who've numbed themselves to so much in their lives.  But living wrapped in metaphoric cotton wool suffocates, so they seek out something or someone who makes them feel alive!  In practice this means some kind of pain.  Pleasure too (hello addictions--from sex to drugs to booze to gambling, etc) but also pain.  Both allow us to feel, to know down to the marrow we are alive and real.

Likewise the other person probably has some mental issues, often bipolar (like Phelix) and quite possibly a sadistic streak (lots of us do) and a nihilistic outlook that makes them whittle away at others.

The combination litters many an artist's life, and small surprise it contains such vast dramatic potential  What we see in Artificial Flowers is the time it finally goes too far. Too much is said and done to allow any continuation.  What happens next instantly comes to mind--but would be a totally different story.  At the end, so much TRUTH stands revealed one story has clearly ended.

And it is riveting.