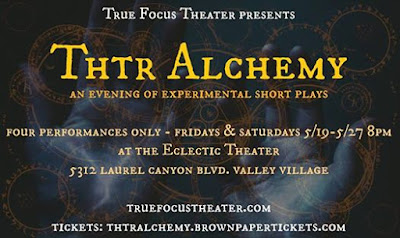 
Taking my seat to see THTR Alchemy I knew very little.  Yeah, it would consist of short pieces.  I knew some of the actors, directors and writers involved.  There would be only four performances.  And it had been created by the True Focus Theater.  This last meant I felt sure of something high quality.  I can think of about half a dozen theatres here in Los Angeles I simply expect to give excellence every single time (a larger group gives it almost every time, while others never do anything poorly or can be counted on to consistently surprise, or entertain, etc.).  Here is one of them.

Eight pieces in all, by a variety of writers.  Each different yet united in some subtle way that felt wonderfully attuned even if I could not put my finger on it.  All certainly felt uniquely theatrical, though—not a retelling of something literary, or an attempt to recreate a naturalistic story on stage.  Rather they each used the power of imagination, the special effects of the mind which live theatre perhaps (oh, hell CERTAINLY) uses best—for many imaginations combine to create waking dreams, i.e. myths.

“Welcome to the Theatre” written and performed by John Kenower started the whole evening off with taking the traditional words we hear at the start of every performance about exits and cell phones (which many a theatre try to make entertaining) then turning it into a mini-performance piece.  Set the tone quite nicely thank you.

“Mailbox Fairies Fear End of Magic” by Cheryl Slean and directed by Elif Savas, then let us into the world of two nonhumans—the title characters.  Truly (Gloria Galvan) and Poorly (Jonica Patella) certainly seemed alien, otherworldly, yet totally real.  Trapped and maybe dying in a box, these winged creatures spoke in metaphor, in poetic license.  Sometimes the meaning of their actual sentences escaped me, but the emotional truth proved never less than nakedly on display.  Amazing how two weird beings with hard-to-comprehend speech could in ten minutes create a drama of piercing power.  Yeah, it was that impressive.

“Let Me Be Bamboo for You” by Vanessa Cate and directed by John Kenower, proved shorter and less powerful, yet also left a more open ending.  Woman (Monica K. Ross) and Man (Rick Brown) essentially enacted a poem, about two people trying to find a way to each other.

“The Captain” also by Vanessa Cate but directed by Elif Savas, could be described the same way—save the Captain of the title (John T. Cogan) and his wife Daisy (Ilona Kulinska) seek to find a way back to their love, a difficult thing as they are so clearly of different visions.  The ending of this, while equally open, shows a more vivid—and a bit disturbing—direction.

“Lemon Head” on the other hand, by Hank Bunker while directed by both Vanessa Cate and Angie Hoover, imagines a dream committee meeting.  From what we can gather, the Committee seems tasked with the US involvement in the Middle East.  Pete (Richard Mooney) evidently serves as Chairman, a man filled with fierce unfocused certainties on a seemingly endless quest for the right spin to explain life and purpose.  Bob (Tyler McAuliffe) would seem to be his number two, a lesser version or echo.  Marlene (Vanessa Cate) come across as an eager, clever follower whose sexuality has become a powerful tool to make her way.  Then there is Lemon Head (Roger K. Weiss), an exhausted figure whose constant work has pushed him into an altered state of consciousness.  Finally Susan (Mariana Leite) seems like a token minority sometimes noticed, often ignored—especially when she actually says anything.  What follows proves equal parts horrifying and funny.

“How to Win a Guy in One Hour” by Angie Hoover, who co-directed with Vanessa Cate, is even more so—hilariously funny and horrifying to the point of grotesque.  Lisa (Alariza Navarez) simply gives advice about how to find your one true beloved.  We know pretty much from the moment we see her she’s disturbed.  Well, maybe not disturbed.  The word ‘psychotic’ might capture it better, a person broken by specific expectations which results in her seeing men as literally things.  She doesn’t end up happy of course.  How could she?  The result may be the most compelling portrait of a serial killer I’ve ever seen on stage.

“Bridget” written and directed by John Kenower interestingly puts a couple on stage in many ways taking the place or role of the audience.  Terry (Rick Brown) and Bridget (Monica K. Ross) are in bed, with the former trying to explain a dream he’s had, what it was about, how he sees it—only it isn’t a dream so much as a t.v. commercial.  She thinks he’s talking about a different commercial.  A specific other one.  One she prefers.  Yet somehow they use this to reaffirm something.

“Huachuca Point” written by Shayne Eastin who co-directed with Vanessa Cate, is the second ten minute epic fantasy I’ve seen in the past year.  Interestingly, this leads me to believe live theatre might have done a far better job with something like Lord of the Rings or The Game of Thrones than film or television.  In what seems like some post-apocalyptic world two women/entities Fleet (Sasha Snow) and Floot (Jonica Patella) serive/protect Spring (Marietta Melrose) until two men come along, strangers named Daniel (Max Faugno) and Ezra (AJ Brody) on a quest based on legends of a huge wall that kept the hummingbirds away, while the females long for them to return.  Danger, revelation and surprise await them all as of course what they seek proves to be something other than what they believe.  Well, what else is the quest about after all?