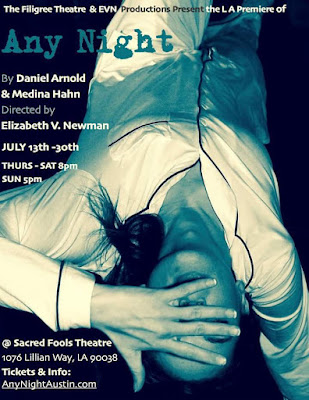 Thrillers tend to be tricky to pull off.  A balance between believable and unforeseen remains vital, preferably pushed as far as one can go.  Yet how to do that without straying into formula which bores (the cardinal sin in theatre especially)?  An innovative style can work.  So--and vitally--does a cast of truly vital, compelling characters.  Then there's the twist on a twist on a twist.

Any Night by Daniel Arnold and Medina Hahn takes the straightforward but daunting approach of all three!

It makes for a harrowing seventy minutes of theatre, a step inside a nightmare where no one knows precisely what's real or not, on an ever spiraling number of levels.

Apart from the utterly surreal set (Vanessa Montano's "set sculptures") the story only seems a tad unusual in that we see some kind of modern dance punctuate the scenes throughout.  Erica Gionfriddo's choreography helps create the world of this play very well.  Intimate, tension-filled, mysterious and somehow also desperate in some unknown, but specific, way.  One brick at a time, this house of horrors goes up around us, escalating in complexity and strangeness--until at last enough of the edifice emerges for we the audience to recognize a shape.

Anna (Marie Fahlgren) seems to jump back and forth between three distinct times.  We only discover at the end what space/time the dance punctuations represent, although there we do begin.  Most of the play involves her seeking out a home in the wake of a failed relationship.  In a surprisingly nice basement apartment she meets Patrick (Zac Thomas), her new neighbor and the building's caretaker.  He seems nice, if awkward.  We hear in time quite a bit of his back story, but since it comes through the memory lens of Anna, how much can we be sure is true?

For Anna is not well.

Her third "place" is a hospital where she has been (is?) undergoing tests for a rare medical condition--one that ultimately killed her mother, who had it as well.  Anna sleep walks, with a vengeance.  She rises and dances, talks, does a variety of other actions pretty much every single night.  Even more weirdly, she does all this while having truly vivid dreams (in fact, this is totally bizarre and indicates an extremely unusual condition--sleepwalking never normally accompanies REM sleep).  She can wake suddenly in the midst of a violent attack on furniture or even people.  Vandalizing her own home remains a possibility, one with precedent.

Little wonder she clings so fiercely to this nice man who seemingly will do anything for her he can.  Patrick meanwhile sees in her someone delicate and beautiful to touch and protect and share a thousand little joys.

Because Anna's growing paranoia--hinted at, not least because of her medications, her own past traumas, the surreal quality of a life where she cannot always tell when she's dreaming--perceives a different possibility.  Yet can we ever be certain if those perceptions represent insight or fantasy?  Worse, can she?

Director Elizabeth V. Newman certainly leads a gifted, disciplined team to create this fundamentally disturbing, nerve-scraping tale of love and loss, horror and despair, hope and desperation in such a visceral, intimate way.  Ultimately the climax represents a reveal that explains almost everything--and yet in some ways almost nothing.  It does haunt, though.  Oh, yes.  It haunts.