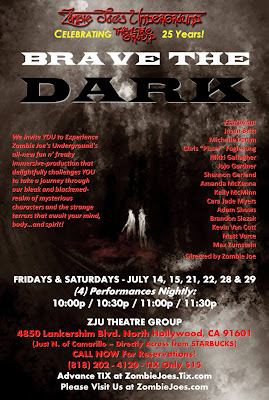 Well, not really.  Because there isn't that much to "spoil" in this case.  Brave the Dark (part of Zombie Joe's 25th Anniversay Season--an impressive achievement for any theatre goup) doesn't count so much as a play as a theatrical experience.

One enters, eyes closed, hands on the shoulder of the person before you.  At a certain point, we are told to count backwards from ten then open our eyes.

Not too hard to figure out that what we experience this year relies even more on shadows, on things heard yet barely seen.  Muffled screams.  Gasps.  Whispers.  What look like faces and bodies writhing or maybe dancing or just maybe doing both.  Hair as well as shadows obscure what should be faces.  When we see an actual face, as often as not it grimaces in fear.

The smiling ones are almost worse.

We seem to have wandered into somewhere between worlds maybe--our own and something else.  Nightmare maybe.  Or purgatory.  The lack of information might seem a weakness but the production uses it as a strength.  Like these beings (are they people) who surround us, we the audience are lost.  Fortunately we also may find our way out, beyond, back into the light.   For a time, anyway.

For the record, I know several members of the cast but didn't realize many were even in the show until later.  Jason Britt, Michelle Danyn, Chris "Pisser" Foglesong, Nikki Gallagher, Jojo Gardner, Shannon Garland, Amanda McKenna, Kelly McMinn, Cara Jade Myers, Adam Shows, Brandon Slezak, Kevin Van Cott, Matthew Vorce and Max Zumstein make up the denizens whose lives/existences we glimpse/experience (sometimes smell--or are smelt).  Other than one visit to classic horror, done with a nice visceral power, mostly these people and their lives remain echoes and shadows, vivid yet mysterious.  During my tenure in This Place, the seeking for a story or even simple orientation kept me alert.  I remain uncertain if there was a story and I missed it, or must I visit a few more times to really understand.

What is most impressive is that while writing that I for a moment wondered if I'd be able to return...