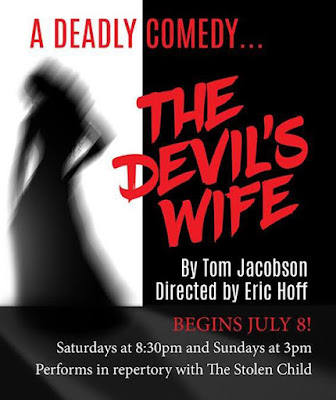 Sitting down to see The Devil's Wife by Tom Jacobson, the word "gothic" arose in my mind.  Mostly because of the set--the dark curtains, the double chandeliers, the actual faint mist in the air.

Sure enough, almost immediately we the audience met all three Ramirez sisters--beautiful and practical Bonita (Mariel Neto), cheerful and sensuous Dulce (Alana Dieetze), smart and forthright Sofia (Caro Zeller).  All three return from their father's funeral, noting their mutual poor shared fortunes as well as their differences--shown in particular with their reaction to the strange fact of the sun shining while the rain pours down.

According to local stories, this is when the Devil beats his wife...

What struck me next was a sense of style--a very specific kind of comedy, based on broad strokes that yet contain complexity and (as we learn eventually) some real depth.

The plot reads like some kind of classic fairy tale or folk story, which I later learned did indeed inspire the whole play.  Three sisters (in the Western world we always meet that number) faced with a common problem.  Finances.  With lots of debt, no money but a large estate, what are they to do?  Enter Nicolas Mastema (Everette Wallin) with a seeming answer.  A contract of marriage, with one third of this estate to be taken in dowry but due to community property laws will remain in the family.

Again, we get very different reactions, although all three ultimately agree to sign the contract.  Bonita, the eldest, agrees to the deal even though she does not want to marry at all and fears the wedding night.  Nicolas clearly prefers Sofia, who clearly shares the same attraction.  Dulce on the other hand sees a very handsome man she'd like for her very own.

In the midst of this is one puzzling detail.  Their father gave Sofia a rough hewn staff, insisting it was important.  Nicolas says their father won it off of him.  He wants it back.  Sofia insists on giving it as a wedding present.

But while Nicolas proves in many ways a very patient husband, he does insist Bonita never ever open the basement door.  He says it is a test of marital loyalty.  As for what lies beyond the door--well, Dulce in particular has theories.

Anyone with any knowledge of folks tales can predict what happens next.  Sooner or later, Nicolas is going to need a new wife--and the contract stipulates any of the Ramirez sisters will do, and thus can save themselves from financial ruin.

So after Bonita is gone, it becomes Dulce's turn (which in many ways proves very funny),  Yet in time, Sofia weds Nicolas--not least because she cannot lie and say she does not already love him.

Yes, she eventually opens the door.  Yes, he really is the Devil.  Yes, that staff proves very important.

But no, I will not reveal what happens.

Yet this show surprised me, in little things at first but then the growing complexity of the story and what it explores.  Why for example would the Devil take time to personally interfere with this seemingly ordinary set of sisters?  Even that answer proves to contain more than a few layers.  How for that matter might a genuinely intelligent, even brilliant young woman react to actually meeting the Devil himself?  Much less finding out she had married him?  Where does God fit in?  That this eighty-minute comedy actually deals with such issues without resorting to pat answers impressed me loads.  In that all the characters come to vivid life earns praise not only for the cast and playwright but director Eric Hoff.