bled for the household truth (review) 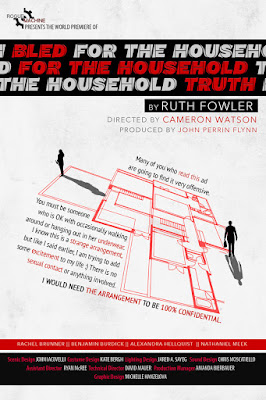 A man.  A woman.  Both seared by childhoods no child should endure.  Both with an urge to drink far too much.  Other than that they seemingly have utterly no thing else in common save the city in which dwell. A homeless young woman from England with a free sexuality.  A grimly serious businessman in New York who cannot, will not touch others.  Not quite two decades in age between them.

If this sounds like a redemptive romance of some kind, you are both right and wrong.  Ruth Fowler's bled for the household truth turns out to contain so much more than romance, than redemption.  Watching it made me laugh out loud, squirm in fascinated horror, almost weep, certainly look away (but always look back), catch my throat in moments of intense deja vu.  That last seems especially important because in most ways my life resembles theirs even less than do each others'.  In terms of detail, anyway.

Both felt like me, though.  Or vice versa.  Even though much of their lives seem unimaginable.

Keith (Bejamin Burdick) in theory has no need of a roommate, yet has placed an ad looking to hire one.  Pen (Alexandra Hellquist) ends up his choice, willing to answer his ad which assure no sexual contact, no harassment, but requires absolute confidentiality and that his new young female roommate sometimes wear nothing but her underwear around the house. Sometimes.  Not on demand, he explains, but simply sometimes.  To give that extra something in his life.

Clearly, a man with issues. Who of course would agree to such a thing if not desperate or with complementary issues of her own? Or both.

Most of the play consists of these two alone in the apartment. For the record the set by John Iocovelli helped make this work brilliantly, along with direction by Cameron Watson.  Ditto sound design by Chris Moscatiello, which an often startling but always effective choice of music between scenes, which in a mostly two character play needing time for the players to change costume, can be (and in this case proves to be) vital.  Kudos too to dialect coach Tracey Winters.

It makes for a sometimes extremely uncomfortable slice of life.  Compelling, also, if one is not too squeamish.  But at heart this one-room play consisting almost entirely of conversations between two characters becomes a version of Homer's Odyssey.  Pen even stands for Penelope! We get to know these two so well, see so many facets and nuances in them that when a couple of strangers (Rachel Brunner and Nathaniel Meek) intrude at the end, we see them with different eyes, see into some of their corners so vivid have become our senses.  More, we sense yet again how desperately our two leads really do need one another on a visceral level.

Frankly some will dislike how it ends.  No climax as we understand it happens, although a powerful threshold is reached, a corner is turned that must alter them both.  But again, not a conventional story arc.  Again, an emotional roller coaster of the soul, made possible by a pair of actors who allowed themselves to bleed all over that stage and each other.

bled for the household truth plays Saturdays and Mondays at 8:30pm and Sundays at 3pm until December 28, 2017 at The Met, 1089 North Oxford (near Santa Rosa & Western) Los Angeles CA 90029.  This play includes nudity and other elements some may find offensive.