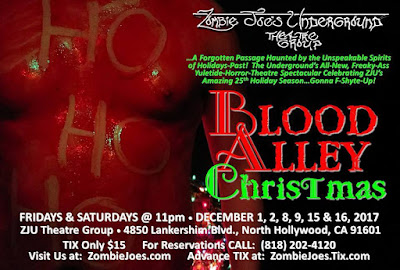 Easy enough to tell fans of Zombie Joe what to expect from Blood Alley Christmas 2017.  The premise follow that of the brand, Blood Alley -- a strange street or neighborhood where the darkness and twisted desires (or acts) from the past somehow pool to haunt in visions.  A police officer (Kevin Van Cott) functions as Virgil to our Dante through a visit to something like Hell or maybe Purgatory.

This one is all about Christmas.

Now imagine those two concepts together.  Take it far.  Now take ti further.  No, you have not gone far enough until and unless you have some female street punks raping Santa with a strap on. I'm not kidding.

For those with the right (or wrong) and dark sense of humor, this is the show for them.  It really does spiral from the disgusting and funny all the way to to horrifying, disturbing and somehow (sometimes) beautiful. Along the way every single member of the cast eventually is totally naked. 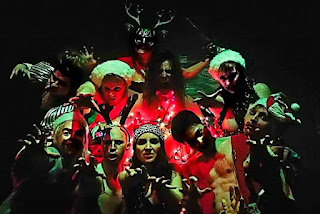 But that nudity is sometimes beautiful, as when Michelle Danyn performs a piece I think of as simply "the red rose."  Sometimes it is hilarious, such as during the "conducting of the bells" with Shayne Eastin. At least once it proves wildly triumphant, via Vanessa Cate.

Adding to all this is gore, some genuine sacrilege coupled with some lovely disturbing images of various kinds, a funny work about one woman between two men under some mistletoe and two different but wonderful pieces involving reindeer.  None were long, nearly all proved very surprising, one (involving elves) turned my stomach while another showed Patrick Beckstead assume center stage as the biggest, baddest, bestest diva of them all.  No small feat considering some of those on stage with him!

A couple of pieces repeated from previous Blood Alleys, one as a sequel (which I'm not sure anyone but regulars would "get" but lasts less than two minutes and is fun anyway). But those who've seen what ZJU has to offer know pretty much what kind of things to expect.  I can honestly say, though, sometimes they will feel surprise.  Likewise sometimes the lack of surprise is what feels so horrible (or fascinating).  The cast -- including Jason Britt, Ian Heath, Makoa Kawabata, Jorge Lozano, Amanda McKenna, Elif Savas, Brandon Slezak and Matthew Vorce -- make up a shuffling of new performers and old hands, all showing nearly as much talent as they do skin. Sometimes more.