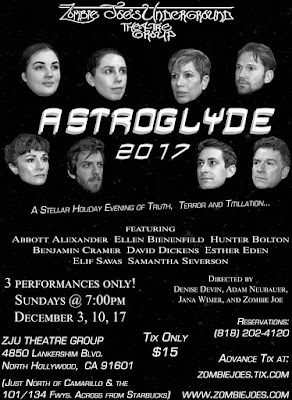 Every year (at least) Zombie Joes gives us a collection of ten-minute one-person shows written by the performers.

Astroglyde 2017 marks their latest feature, sadly for only three performances with two remaining.  Let me be frank, this is a treat just in time for Christmas (or Kwaanza or Saturnalia etc.).  Try to go catch it if you can, if this review intrigues at all.

This year's selection consists of eight tiny plays, ranging from the quite good to pretty spectatular, poignant to funny, dark to pretty light, startling to comfortable.

A Mother's Love written and performed by Elif Savas, directed by Jan Wimer, plays out as a delicious dark comedy.  Savas is a beautiful woman who makes herself into something of crone for this monologue that seems like nothing more than a mother giving her son an important recipe.  It soon turns very wonderfully twisted as we learn why she has to give it to him right now.  Seems the police have arrived...

The Space Between Us written and performed by Hunter Bolton, directed by Adam Neubauer, has a pun built into almost the very first line. C'mon!  An astronaut named Major Tom? But it hinges on the simple idea of a man's last message to those he loves. Simple but with some real emotional kick and honesty.  My only real complaint was the costume but creating a makeshift space suit is no small task so I should really shut up about that.

Out of the Closet written and performed by Ellen Bienenfeld and directed by Jana Wimer features the only non-human character to serve as the central character.  In this case, the story focuses on an old fur vest stuck in a closet for what seems like forever, pining for the days when her owner would wear her to meetings and Broadway shows.  Clever and well done, complete with an actual ending.

All the Scots meanwhile, written and performed by David Dickens an directed by Denise Devin, easily wins as the most ambitious piece this time. A period piece set at some point in history I could not identify, it gives the central character at least four locales to share with (i.e. create for) us, two other characters at least with which into interact (not counting the horse) and hints of a much greater story.  Frankly, I think this was too much for one bite.  I would urge the writer-director to expand on this, make it more precise, then maybe go do it for the Hollywood Fringe!  Lots of promise here, but I think it really needs more time to get to the heart of the story.

Squirreled Away written and performed by Esther Eden and directed by Zombie Joe comes close to being a textbook example of what such a ten-minute piece must be.  It manages to be compelling, self-contained for mulitple reasons while remaining open-ended, contains many layers of revelation including a twist that alters our perception of everything, and leaves us feeling moved but not sure in what way.  These are all compliments, and indicate an admirably adult work.

Cattle Call is just plain funny, especially if you are in theatre at all.  Written and performed by Benjamin Cramer and directed by Adam Neubauer, it comes from exploring a simple idea in all sorts of yummy unexpected ways.  An actor at an audition trying to make a single speech just right.  Kudos for this one on many levels.

A Cinderella Story written and performed by Samantha Severson and directed by Zombie Joe touched my heart most. Call it a fairy tale gone wrong, a touching and melancholy as well as upsetting vignette which sweeps us up in a character's hopes (which to be honest echo our own) then takes us further into the story, to a twist then another and finally another.  We end up feeling a powerfully mixed brew of emotion.

Mother, Brother and Will written and performed by Abbott Alexander directed by Denise Devin in the end was my favorite piece of the night. A man with...well, issues...evidently comes to see his mother about her will and all kinds of things spill out. Do not believe for one moment you know what's coming based on that description. This one is full of surprise, and the fact we remain totally sucked in to this man's world -- about whom we never know much at all but in which we totally believe -- gives proof to how fine the words but especially the performance is.