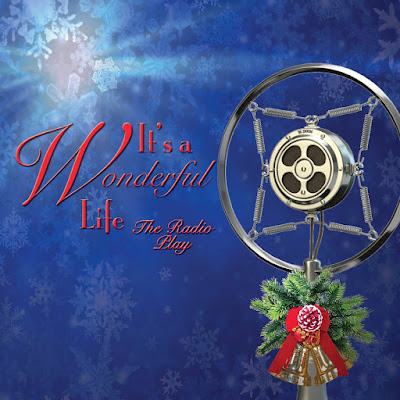 For a few years now Theatre Unleashed has produced Jim Martyka's lovely stage adaptation of the Frank Capra Christmas classic. If you haven't seen it yet, you're missing a delightful holiday treat build around a stunningly simple but wonderful idea -- a radio station in the years after WW2 putting on a show, complete with a story involving the cast and crew of the station which parallels that of the radio play.

Now I can go on and on (and have) about the thousand lovely touches in this adaptation (including the hilarity that ensues when the Foley Artist proves to be blissfully incompetent).  I could also compare and contrast this with last year's cast although what would be the point of that?  Rather, I praise this production with all its individual talent and style which makes it...well, wonderful.

Carey Matthews and Heather Lynn play the leads, the Station Manager and his Assistant who must step into the roles of George and Mary literally seconds before air. Their own relationship bleeds a little into the show-within-a-show, which adds one of many fascinating layers to the proceedings, up to and including people misreading their lines and at least one cast member having had a tad too much to drink!  Yet (and this proves important, not just a conceit) they all double down and give us the story  which has become an American classic -- the anti-A Christmas Carol, in which a man is not shown his terrible mistakes by ghosts, but the genuinely fantastic value of his choices even beginning in childhood.  Easy (and deserved) as it is to praise Matthews and Lynn for lovely performances, they are but the heads of a wonderful ensemble.

Richard Reich, Adam Briggs, Libby Letlow, Nick Salter, Corrine Glazer, Theresa Stroll, Jessica J'aime, Eric Stachura, Brittany Stahl, Samwise Aaron, and Emily Donn (directed by the Jenn Scuderi Crafts) all create this sweet and whimsical world to life, where we get to live for not quite two hours.  Not a sickeningly sweet world, nor a ridiculous one, not even ultimately one very much like that of original movie, where angels show up to talk you out of suicide.  But it is a world about as sweet and hope-filled as the real world can ever be, which when you think about it is rather better than we often believe.  Makes for a nice gift, for Christmas or Hannakuh or your holiday of choice.

What I could do -- and the temptation lingers -- is go over in detail just all the lovely touches the cast brings to the script.  Really, that would feel delightful to me, reliving the banter between the Actors (as opposed to actors) as well as the simple human reactions they brought to life.  But that would make up a very long review, longer than anyone wants to read.  Rather let me say sometimes I genuinely prefer this version to the movie with Jimmy Stewart.  Sometimes.  Most of the time I cannot make up my mind.

Sadly, as of this writing (and due to my scheduling) only three performances remain of It's a Wonderful Life: The Radio Play, which are Thursday December 14, Saturday December 16 each at 8pm, and Sunday December 17 s at 3pm, at The Belfry Stage 11031 Camarillo Street (just west of Lankershim), North Hollywood, CA 91602.