Beauty and The Beast (review) 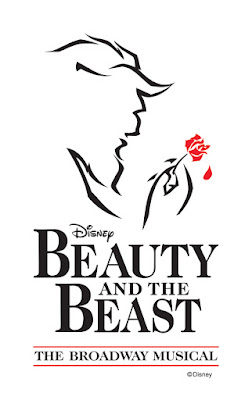 Casa0101 in Boyle Heights is hosting the live action version of the Disney musical of The Beauty and the Beast.  To be honest, for me rather problematical.  My favorite fairy tale!  My least favorite version!

But this production wasn't aimed at me, but at the children in the audience.  They had a marvelous time!  You could feel it in the air, see it in their faces, hear it in their reactions to what went on.  Understandably so!  It was quite charming, especially in the second act.

The Disney version of course is very different from others, what with the magic rose and singing furniture plus cutting the evil sisters and creating a new (but very fun) villain, i.e. the ubermacho bully Gaston (Andreas Pantazis).  It also gives the leading lady an actual as well as logical name, Belle (Andrea Somera), which appropriately enough translates as "Beauty."  Then there's the curious business of the magic rose, which gives a ticking clock deadline to events. 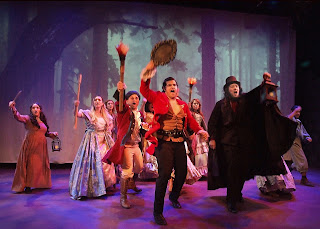 The Beast (Omar Mata) lies hidden under an elaborate headgear that yet reveals his face. Honestly I think it could do with a redesign.  Casa0101 has only about 99 seats and all that brown became a blur.  Bigger pointy ears and really dark horns maybe.  But they are trying to make him look like someone animated, so...

Honestly it took me awhile to get into it, in part because Belle seems like such a snob and her father (Luis Marquez) a less interesting version of Japetto (not the actor's fault--he's written that way).  But--and this really cannot be over emphasized--the children didn't see it that way and just got totally sucked into this fairy tale world. The fact most of them have seen this before is the point!  Children like to see the same thing over and over again.  Not because they are stupid but because their senses are so hungry, because their enthusiasm remains undimmed.

I envy them that.

But the acting, deliberately just this side of cartoonish (it is based on a cartoon after all!), works and the musical numbers start off nice then get better and better.  By Act Two they had become universally splendid, or at least enormously fun! 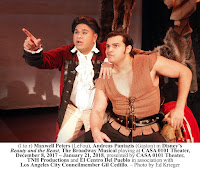 It was a fun show.  The designers did a lovely job creating the non-specific yet very real "world" of this musical, while at the end the power of true love and redemption shone through.  Even (and this is a bit unusual for the live action versions of this tale) the actor playing the Prince (Jesse Maddonado) who had been the Beast was no place holder for his looks but genuinely acted and had some genuine chemistry with his leading lady!