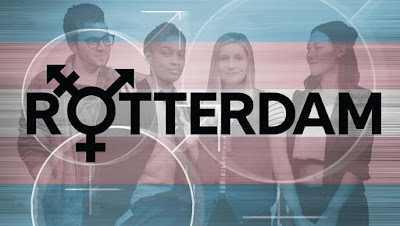 Rotterdam, for those of you don't know, is a Dutch city, not far at all from the UK at least physically.  If the play is any guide, it would seem light years from the most conservative, stuffy aspects of England.  More importantly, the play allows the city to stand in for a kind of limbo in which the characters live.  Its story is of four people who ultimately decide to leave limbo.

Which is a terribly misleading sentence.  This play is funny!  Very funny!  Chock full of amusing and very human characters whose rough edges keep bouncing against each other to entertaining effect!

Which in turn counts as a misleading paragraph.  Rotterdam is much more than a simple comedy, no matter how funny the events turn out to be.  It also rends one's heart at what these people go through.

Anguish and hilarity.  When those two combine, you are probably in the presence of very high quality indeed.

Alice (Miranda Wynne) is a closeted gay English girl living in Rotterdam with her girlfriend Fi (Ashley Romans). They have a bet over whether Alice will ever come out to her parents, and are fiercely but playfully bickering about it all when Fi drops a bombshell.  She kinda/sorta wants to be a man.  Later, she makes that firmer.  She is a man, has always been a man. Alice quietly reels in the face of this.  Her ex boyfriend Josh (Ryan Brophy), who is also Fi's brother, tries to be supportive of them both.  Meanwhile Lelani (Audrey Cain), Alice's very flirtatious co-worker, who tellingly proves the only one to really like Rotterdam, keep trying to get Alice to relax and be herself.

Not a bad set up might say.  And here we get to the heart of what makes this not just a good play, but a powerful one.  Because all of this, while taken with some humorous sweetener, keeps getting more and more real.  The characters do learn and grow, sure, but it hurts.  Like it does!  They make mistakes, some of them remarkably stupid and in context almost everyone does something ruthless or cruel or both.  Remember -- once you leave Limbo, the next stop is Purgatory.  And what is a greater purgatory than one's self at your worst?

Again, this play is funny!  It has to be, otherwise we'd never stop crying at some point.  Which rather than feeling forced, seems perfect.  After all, what is laughter if not a balm for sadness and tragedy?  We laugh so as not to weep.  Meanwhile, as this play -- this chapter in these characters lives comes to a close -- every single person leaves Rotterdam.  Josh finally stops following Alice around to get a life of his own.  Lelani gets a nasty taste her mouth of what real consequences can be, after she's revealed to be in many ways remarkably naive.  She hates it here now and want to try Amsterdam.  Meanwhile Alice and Andrian (Fi's new name) are on a boat back to England, talking but not looking at each other.  Openly unsure of what happens next, save that going back and staying has ceased being an option.

Which means, they are where the rest of us are, or where we will be.