When I saw Uncover the Moon at Zombie Joe's my reactions ended up very mixed.  The whole idea of an original myth/fairy tale about a young woman's coming of age intrigued me more than a little.  And let me state right now Susan Chambers seems a very talented writer and director.

For one thing, she genuinely had the beginnings of an original and startling myth in her script, one that felt familiar but strange in ways I love to experience on stage. Her weird tale of the Madwoman from the Moon grabbed my imagination right off.  More, she had the skill to keep the players at high energy with a great deal of theatricality throughout.

However, I have some problems, as well as (to be fair) some problems with my problems.  That will clear up in a minute. 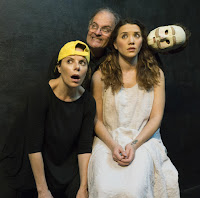 The central character Levana (Mieko Beyer) is an ordinary girl in what seems like an (sort of) ordinary town or place whose Mother (Scathach Ashley Cotter) doesn't seem to really care all that much about her, and whose Father (Philip Sokoloff) seems to enjoy frightening with warning stories about a Madwoman who sometimes falls from the moon and drips blood that will infect others with her madness.  Sure enough, once the little girl falls asleep the Madwoman (Shalonda Shaw Reese) does indeed visit her, to seemingly bestow a blessing.  Next morning, people begin treating her with revulsion, starting with her brother (Laura Lee Botsacos) and then spiraling through various male figures (all played by Garrett Botts).

All well and good! I began watching this with a big smile on my face. Alas it quickly faded. Not because of the cast, who did a good job overall. Nor from a lack of talent on anyone's part. But I had definite problems with scope, precision and nuance.

Scope because this seems to be about a play about the power of women -- what it is, how it is both liberating and frightening, how patriarchal societies seek to negate it.  In forty five minutes.  Sorry, not enough time for all that.  To be fair Wagner's Ring Cycle might be too short that much scope.  The way around this was precision, which proved in low supply.  What precisely was this play supposed to explore and comment upon? It touched on female fears, on demonization of the feminine, on the female power of life generation, on personal courage, on hypocrisy, on female alienation from each other, on putting price as opposed to value on things, etc.  All good subjects!  But what was the main thrust, the central element to be explored, the first and last question being asked?  No idea.  And because so many subjects keep bouncing around, nothing ends up with much depth or nuance.  It cannot.  Here one simple example -- the total lack of male interaction with Levana involving anything but disapproval and disgust. So how did she become pregnant?

This comes across as a early draft of something which might eventually be a genuinely stunning work.  If the author does not pursue this piece, I eagerly look forward to what else she will do.  Because this grapples with fascinating, powerful themes in startling, theatrical ways.  Someone pointed out the playwright to me the night I saw this.  She is very young, which means I have high hopes of many more plays from her.  This one certainly simmers with promise.