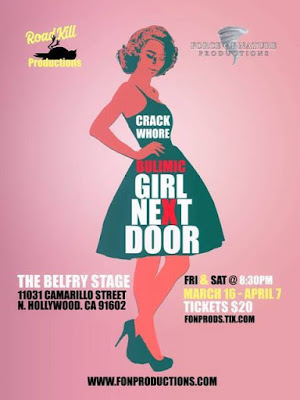 With a title like Crack Whore Bulimic Girl Next Door, one has certain expectations. Seems simple enough.  However, expectations will vary quite a bit from person to person.  Myself, I rather thought this would prove a pretty dark comedy.

In some ways I was proved right.  The play is funny, funny while exploring some troubling, yes dark issues about life--most especially the life of women.  Almost immediately we meet all three title characters--Crack Whore (Elizabeth Blake), Bulimic (Gloria Galvan) and Girl-Next-Door (McKenzie Eckels).  They even wear named t-shirts in case we forget who is which.

That is, until we realize all three in fact are the same person.  Three facets, shards, avatars, aspects, phases, moods, etc. of the same woman who in the course of her life story hits bottom.  Her bottom, her crash landing from which she either dies or somehow walks away.

Interestingly, all three pretty much reject their names as pointless labels.  Which makes up one of many points to be made.  Now, plays which consist of the cast talking directly to the audience tend to prove problematical.  Too often what happens is a strange loss of focus and energy (monologues in Shakespeare often fall into the same trap).  Not this time.  Partially because the play insists they interact with one another, as well as a series of other characters (mostly male) played by the same actor (Edward Alvarado).  For another, director Jennifer Novak Chun makes sure people don't fall into that trap, so they remain talking to someone rather than reciting lines, pursuing an objective instead of simply emoting. 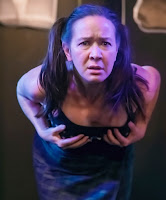 So we follow this female Trinity from a childhood where her questions she realizes are never welcome, where invisibility becomes desirability, to the (many) pains of adolescence.  Our society tries to elevate the teenage years to a golden age, but of course for most of us it seems a minor eternity spent in a personal inferno.  We want so much.  Know so little.  Make so many mistakes.  Our bodies change for better and for worse, most of the time seeming for much worse.  Sexuality emerges as a toxic blend of ignorance, bad luck and some amount of degradation--relatively small amounts if life goes very easy on you.

It does not go easy on our Trinity character.  Really, if this play didn't have plenty of humor it would make Strindberg look like Andrew Lloyd Webber. 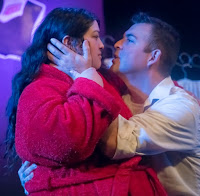 Failure, frustration, self-loathing--an emotional cocktail anything but rare if you've ever even gotten to know any woman very well.  Sadly.  But the stuff of self-revelation, of drama and terrible truths first endured, then recognized and hopefully transcended.

Not perfect (as if anything really is).  A metaphor introduced early on becomes increasingly abstract, but that is not immediately obvious.  On the other hand, it leaves one wondering, thinking.  Not a bad reaction in an audience.  Likewise one wonders at the exact moment of crash-landing.  But these leave a feeling of contemplation in their wake, rather than a wrong note.  At the end of the performance, I felt vast kinship with these three-in-one women.  I looked at them and saw someone who seemed all-too-personally familiar, even with every single detail different from my life story.