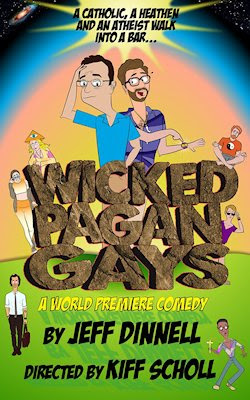 I joked to a lot of folks at work about going to see play titled Wicked Pagan Gays, with the note that with a title like that I expected something fabulous.

The story, set in modern day Los Angeles, centers around Jeff (Jeff Dinell), a writer/bartender who proudly wears his atheism on every sleeve--putting him in direct conflict with his over-the-top roommate Tyrell (Jordan Green) but even more with Greg (Nathan Tylutki), a former co-worker who re-enters his life under odd circumstances.  Greg has pretty much never found a New Age fad or idea he did not embrace with vigor--a fact that makes the super Roman Catholic Tyrell condemn him as a witch.

This already hints at the silliness to come, interwoven with some genuine debate about faith and belief and tolerance as well as the weird dynamics to which we human beings are prone.

The show sizzles with laughs, while characters interact in some wildly inconsistent (but very human) ways, up to and including what might be called some severe moral lapses.  Well, not too severe.  The play evokes laughter from darkness, yet not deep-space-dark only day-to-day (but studiously ignored) shadows.

Everyone for example comes across as simultaneously shallow yet deep, depending on circumstances and subject.  Just as everyone proves willing to engage on some serious issues, but never more than a surface level--although Jeff at least proves the better debater, while even though an atheist finds himself at least listening to ideas he evidently despises.  Hardly a single character fails to show real kindness sooner or later, as well as genuine spite, sometimes to the point of viciousness.

Mix in thwarted ambitions, deep-seated neuroses, uber-competition, true belief in contradicting philosophies, a lot (and I mean a lot) of sexual details and plenty of crazy (yet believable) plot twists, the result proves itself as some deliciously dark farce.

And yet.  Despite a good (if tricky) script by Dinnell, wonderful direction by Kiff Scholl, coupled with a genuinely funny and talented cast, the production fails to completely gel at the end.  Make no mistake--this show is funny!  It entertains!  It even makes one think about some things!  Yet something didn't feel quite right, and after thinking about it for awhile I've concluded the problem stems from something physical.  Multiple scenes change location again and again, but every time it happened the flow of the play stopped dead while the set shifted.  The set shifts were well done, accompanied by music and flashing lights, but the flow of the story still endured a hiccup every single time this happened. With the rhythm of the play so interrupted, it never quite reached its full potential.

To be fair, this tends to show up as a perennial problem in live theatre, although all kinds of interesting ways exist to get around it, depending on details.  More, while the play didn't reach the heights maybe it could have, it and the players definitely achieved flight.