This is a series of posts sharing my ideas/considerations while getting ready to adapt Bram Stoker's novel Dracula for the live stage. Expect one of these per week for awhile.

One: A New Vision

Anyone planning on adapting Bram Stoker's novel Dracula for the stage faces a challenge.  Why do that?  Aren't there plenty already?  I've reviewed at least four different versions myself!

So why on earth do another?

The only answer seems to me is to bring something new to the table, something unexplored in earlier versions.  So--not a zany comedy, nor a Phantom-esque musical, nor a tongue-in-cheek period piece, nor vision of Victorian London as a Feminist Dystopia, etc.  But what ultimately fascinated me was Death.  Maybe I'm showing my age... 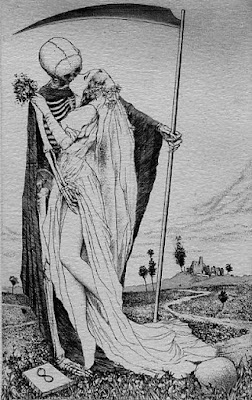 Part of this (in my mind's eye anyway) is the medieval image, emerging in the wake of the Black Death, of the danse macabre, not only in terms of the Grim Reaper leading a dance of those who have passed but also the rather more disturbing notion of Death itself as a lover.

Not to define Dracula himself as some kind of byronic suitor to Lucy or Mina (I don't object to this, but believe that trope reached saturation point a while ago), but rather as one of many different views people have of death.  Some see it as an enemy to be fought and struggled against with every breath.  Others choose to ignore it whenever possible.  Some cultures view it as the ultimate moment of life, that by facing it face forward, even choosing the method of one's own passing, we win a kind of victory.  Many religious folk (in theory) see it as nothing but a door into eternity.  I suspect however that to those dying of very painful conditions, it can be an alluring figure--the ultimate mercy.

To be honest, this was not where I began.  Rather this emerged out of what else I found myself wanting to explore...