Man for All Seasons (review) 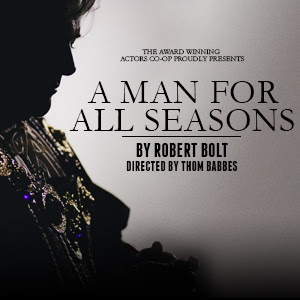 Honestly never before have I see a live stage production of Robert Bolt's play.  The movie with Paul Scofield yes, the made for television version with Charlton Heston, again yes.

After seeing A Man For All Seasons by the Actor's Co-Op, my view is one of doubt this should be filmed.  It works far, far too well as live theatre in ways all but unworkable for other media.

Topical, as well.  For those who don't know, Bolt's script tells of Sir Thomas More, a prominent lawyer in Tudor England who became friends with a young King Henry VIII, then broke with him over that monarch's efforts to divorce his queen to marry Anne Boleyn.  This resulted in a break with Rome, the formation of the Church of England, and generations of religious conflicts which impact British life to this day.

The Roman Catholic Church eventually canonized More as a martyr.  In the hands of a lesser writer, his story might well have emerged dripping with maudlin sentiment.  Instead we get a vivid, nuanced and complex portrait not only of More (Bruce Ladd) but the rest of the people in his life--his fierce wife Alice (Treva Tegtmeier), their bright daughter Margaret (Elsa Gay), her eventual fiancee William Roper (Isaac Jay), More's friend the Duke of Norfolk (Sean McHugh), the wonderfully ruthless Thomas Cromwell (John Allee), etc.

Also, one feels more powerfully of the play than of either film, a more powerful feel for how these all these characters remain topical because they seem real.  Lacking the myopic focus of a camera, the whole story seems less a series of beautiful images and more slices of genuine life.

Genuine life and genuine evil. That actually surprised me a bit, because this play fails to take a stand on several questions.  Was it right to break away from Rome?  Did the threat of another generation mired in civil wars justify such extreme action?  The questions arise, naturally enough, but the play takes no side in that.  Rather it focuses on integrity, on doing the right as one sees the right, on the vicious power of hypocrisy as well as the difference between law and mere administration.

A vivid image of this lies in a character we only see once, but everyone talks about--King Henry (Ian Michaels) himself.  Not the overdressed whale of a man from the Holbien portraits, but the handsome and smarmy figure we soon realize has very nearly no ethics at all, just desires--including the weird desire to be seen (even by himself) as morally right.  So the wheels of church and government turn and seek to destroy a man who seeks only to be left alone, because this King remains very much a bully and a child, at least emotionally.

With all this, and central to the action, lies The Common Man (Deborah Marlowe) filling, often unwillingly, a wide variety of roles in the story of More's final legal murder.  This person confides with the audience, sharing jokes and some background details, but all the while refusing to stand up and challenge authority.  More disturbing must be Richard Rich (Mitchell Lam Hau) a naive but ambitious student who learns to climb the political ladder in the most efficient way possible--via treachery.

Rounding out the cast is the Spanish Ambassador Signor Chapuys (Vito Viscuso) along with Cardinal Woolsey as well the Archbishop of Canterbury (Greg Martin)--the flawed men defending the Church, such as it is, that More feels bound by far more than honor to preserve--to a heartbreaking conclusion.

All in all, under the direction of Thom Babbes, this play portrays what Los Angeles theatre seems increasingly skilled at recreating--a very possible nightmare when the powerful lack compassion or loyalty, enslaved by desire and cowardice instead.

A Man for All Seasons plays Fridays and Saturdays at 8pm, Sundays at 2:30pm until April 15, 2018 at the David Schall Theatre (part of First Presbyterian Church of Hollywood) 1760 North Gower Street. Hollyood CA 90028.