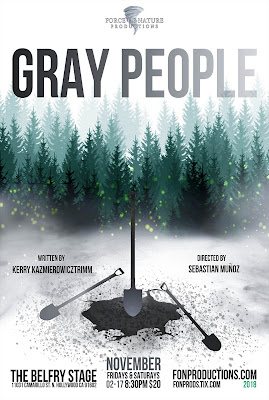 Having seen a few works by playwright Kerry Kazmierowicztrimm, I went into Gray People expecting fascinating, deeply troubled people in a heart-breaking situation.  He did not disappoint.  Neither did the cast, nor the direction nor any part of the design.

In the middle of the woods at night.  A pile of dirt on one side, shovels nearby.  Three people in dirty clothes wait.  And wait.  Then they wait some more.  In fact they've been waiting awhile given how one of them keeps glancing at his cell phone.  Another hums to himself and makes ever increasing drumming sounds, hands against thighs, until he catches the eye of the first man and stops.  The third, a young woman, watches all this, missing not a breath, not a beat.  She seems to be waiting for something else than the other two.  Just a feeling, that, but strong.

Also, very correct.  Kudos to the cast and director Sebastian Munos for conveying just that.

Eventually these three start to talk a little, much to the first man's dismay and irritation.  He calls himself Adam (Kyle Felts) and has been doing this digging job with James (Walter Kartman) for years.  He doesn't want to talk because this work is secret.  Indeed, their employer insists they never share personal information, even though James clearly longs to--especially with the new-commer, a pretty girl named Jenny (Olivia Lemmon).

What follows proves an intense, every growing and changing dynamic as Jenny, the new ingredient to the brew, proceeds to cause all sorts of reactions.  James, utterly smitten, cannot hold back from talking (a pretty strong sign of just how lonely he is) and in the process reveals an uncomfortable fact--namely his own obvious mental challenges.  Not surprising, given the fact he's easily the worst liar of the three.  Adam, on the other hand, deeply resents her presence.  He might have disliked any intrusion but her gender clearly presses a button or two.  Nor does Jenny's habit of subtly but consistently pushing their buttons help.  Well, it doesn't help them.  It doesn't help anyone stay silent or keep secrets or remain calm.  But then, in retrospect, she didn't want any of that.

In the grand tradition of Eugene O'Neill, Edward Albee, and Tennessee Williams, what we watch and hear and feel turns into the peeling away of secrets.  One layer after another is cut off, sometimes almost literally.  James, so very eager to talk, can barely stop.  He shares all sorts of things, including how he feels about this very illegal job they have, how he likes to think of it.  He's so open Adam is shocked to realize "James" is his real name.

Jenny's secrets are the ones that (almost) come in last.  She also gives the play its title, in uttering a piece of personal wisdom the entire show proves utterly wrong-headed.  "Gray people" she says "those are the ones to watch out for.  Black and white, you know where you stand.  Gray people--you never know what they'll do."  Ironically, she's right about that in a way.  But in the world of the play, as well as in our world, the grays are pretty much everyone.  She may think herself White or Black, but events prove her as gray as anyone else.

That little lesson in the human heart, like most such, comes at a price and proves anything but cheap.  In the dark of night, far from society, when the silent finally begin to talk, they all face some terrible but maybe also wonderful truths.  Most truths are a mix of the two, after all.  Neither black nor white.  Gray.

Wonderful write up for GRAY PEOPLE David. So glad you enjoyed it so much. It was great having you. Thank you so much!