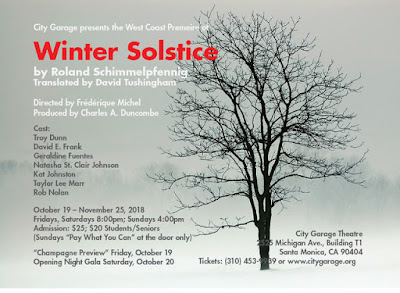 To be topical, yet subtle.  Intensely focused on an issue yet without preaching.  On top of that, to achieve the surface below which boils and dances currents of dangerous passions--doubt, loneliness, love, hate, guilt, lust, horror, fear.

That may sound pretentious beyond words but in my eyes it describes a difficult, powerful theatrical achievement.  That is how I describe Winter Solstice by Roland Shimmelpfennig, one of Germany's most popular living playwrights.  Of course, some find the idea of listening to anyone other than a true-blue American pointless.  Which ends up one of the points this play addresses. 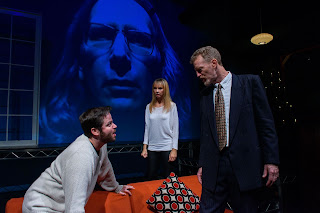 It proves in some ways the union of two different kinds of story.  One, pioneered by Anton Chekhov, is the family-as-society drama.  Another is the folk tale of a stranger who asks to be let in one cold night.  But is the stranger good or evil?  An angel testing your compassion or a devil eager to take advantage of it?  Such becomes the challenge for Albert (Taylor Lee Marr), a comfortably wealthy author with a wife and daughter, dealing with the not-fully-welcome visit by his mother in law Corrina (Geraldine Fuentes).

Simply put, Albert seems a nervous wreck.  It doesn't help his wife Bettina (Natasha St.Clair-Johnson) is distracted by efforts to direct her film, leaving him to deal with her mother and all the while despising him for the very qualities she had loved him for once--the softness, the gentle way he is determined to remain civilized. 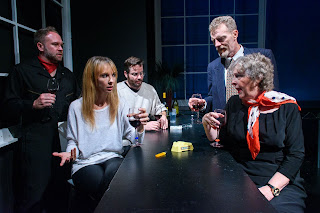 Much of what we see and hear comes via the filter of two Writers (David E. Frank, Kat Johnston) who semi-narrate much of the story.  Through them we learn many nuances, many details, many tiny moments and their meaning in the narrative.  Their presence illuminates as well as challenges--the actors must often pause, becoming still in the moment without losing their momentum, without letting go of the tensions in each moment.

I almost cannot emphasize enough how much the play depends on this cast of actors to make it work--and how completely under the direction of Frederique Michel they achieve it! 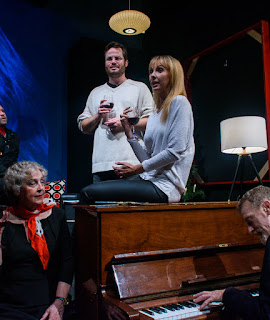 The essence of the plot begins when Rudolph (Troy Dunn) shows up at their door, a charming older man who met Corrina on the train.  Clearly dazzled, she invited him over for Christmas Eve, which is tonight.  Adam does not wish to turn a stranger away, not at night amid snowfall.  So the Stranger is allowed entry and he starts applying his considerable charm to them all.  It soon comes out that, although German, Rudolph was born in Paraguay because his family moved there.  Albert, a Holocaust historian, instantly becomes suspicious.  Why did a German family move to Paraguay sixty plus years ago?  One answer seems pretty obvious, which only adds to Albert's stress.  Amid his taking pills for spasms and tensions and allergic reactions to the Christmas tree being mounted then decorated, he drinks a lot of red wine.  Well, so does everyone.

But the clues mount.  Rudolph plays the piano, disparaging non-German composers, mocking Poles and insisting there are no great Jewish composers.  He extols what he calls ancient traditions we've lots touch with, eventually suggesting they all celebrate the Winter Solstice instead of Christmas.  Never mind the Winter Solstice was last week--reality is what we can make it!  And he talks about keeping cultures distinct.  Apart.  Separate. Don't let strangers and foreigners in.  Recognize how nature has superior and inferior types.  We should follow nature that way.  And so on. 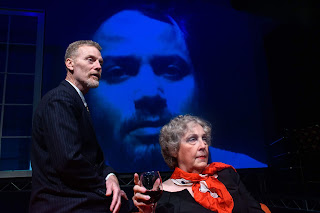 Fascism 101 essentially.  But charming.  Smooth.  Comfortable.  Even entrancing.  Just the small talk of an elderly doctor with reactionary views?  Maybe.  Or also an agent of a specific agenda?

The problem is--Albert did the right thing.  He let a stranger in from the cold.  More, he is the one who sees the danger but barely counters a thing the man says.  He just gets more upset, takes more of his medication, begins to notice how his friend the artist Konrad (Rob Nolan) feels seduced by Rudolph's words.  Via a semi-drunken haze he sees a way to unmask this stranger and maybe banish him.  Maybe.  But he doesn't do it.

Should he?  The more one dwells on it the more valid seem Albert's fears.  Given the intense detail with which these events unfold, his conundrum seems ever more real.  Ever more what we ourselves must face.

Which makes for a fascinating, swirling human dance of human frailty, good intentions, mistakes and of course lots of temptation.  We become part of the events because we seem both there and not, looking in and in some way partaking.  Albert's paradox becomes our own.