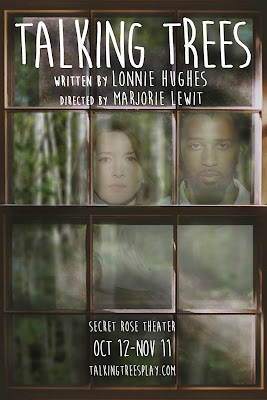 I went into Talking Trees by Lonnie Hughes knowing very little.  I got the impression it was about a difficult human relationship, especially an interracial one, and was written fifteen years before.  Mostly, though, the title intrigued.

Ended up wishing more had been made of that idea.  Trees.  Talking with one another.  In silence, so low even the breathing of other living things can drown it out.  Notice, though, how clearly the idea ended up in my mind?

In essence we pick up with some marriage counseling involving Edmund (Jahmone Duhaney) and Angolina (Amy Braddock) with their Therapist (Vince Don Vito).  At this point we come across a problem in the play, one that despite everything else good, makes for a rocky start.  Quite simply the language is elevated, yet we don't really have a chance to adjust our ears.  For another, almost the entire scene is played to the audience rather than between the characters--which is the whole point!  Here we meet two people evidently in love--or who say they are--and have problems with communication.  But it makes for a difficult start of the play.  We struggle to enter into the world of the play.  That world tantalizes but takes a bit longer to let us inside. 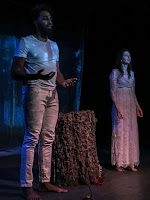 Once we're there, the story and characters grow increasingly vivid, real, human.  Edmund and Angolina know they have problems, yet cannot quite tell each other what they need to know.  Each becomes distracted.  There's a lot of 'on the nose' dialogue for awhile, with Edmund actually asking his best friend Thomas (Ray Tezanos) "Am I a man?"  Then there's the almost over-the-top racist Woman (Lindsay Seim) with her weirdly eager willingness to admit a desire for genocide.  Yet the elements do slowly cohere.

Eventually, a few layers peel away.  That Woman we learn was made to fit into a shape not of her choosing.  Likewise Angolina's mother (Barbara Ann Howard) whose dislike of her son-in-law seems instant, reflexive, implacable--she reveals herself a victim, someone scarred by life and so left less than she was.

I suppose that is what I took away from the play most of all -- a yearning for life as yet unspoiled, for hearts unwounded and tongues unafraid to speak true.  Much of the play becomes a melancholy lament, the actors who have a chance revealing a great deal of pathos.  Regret infuses their words and looks.  This proved so consistent one must credit director Marjorie Lewit for that particular vision, for the actors all finding that note.

And haven't we all felt precisely that odd nostalgia, often for something we've never consciously known?  Have any of us in childhood had the life of a tree, communicated as trees do?  Maybe that is what the title means.

The play does not end happily, not in conventional terms.  Death happens, as it must, and in what seems to be beyond the veil of life our lovers meet once more, this time before a tree chopped down.

Mixed metaphors there a bit, to be honest.

Yet what seemed to emerge from the story, at least in my eyes and through my years, filtered through this heart, is that to become as talking trees is nothing we can reclaim.  Rather it is something we must find and create.  Then--here lies the biggest trick--keep.

So, an uneven play with a few problems.  But something at its heart, something to make one feel as well as think.  A good production that teased that heart into showing itself.