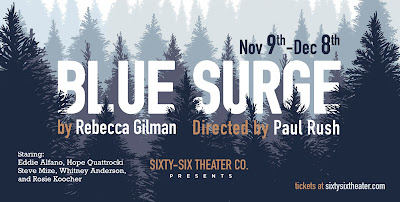 Expectations can cause problems.  With the current political environment, the title Blue Surge struck me as quite probably about politics, about the values we as a nation are embracing or rejecting.

What I got was...maybe exactly that.

Curt (Paul Rush) we meet as he goes to a massage parlor, clearly expecting more than a massage.  He clearly intends to pay for something else, and when Sandy (Eliza Padden) balks, clearly feels surprise and disappointment.  But he still wants a massage, which just as clearly surprises her.  Despite her claims, she doesn't know much about giving a real massage, but they have a friendly chat while she tries.  The man has muscles tied up in knots!  In fact, they seem to like each other and he insists on paying her a full amount "for her time."

So it begin.  When the very same massage parlor later has Doug (Matthew Callari) say the exact same thing to Heather (Rosie Koocher), it ultimately leads to an arrest.  He is an undercover cop, and pretty soon we find out so is Curt.  On the other hand, Doug technically committed entrapment so the whole bust goes south.

Curt and Doug prove to be partners in some small city's police department, exactly where I never quite figured out.  Nor does it ever matter.  The story focuses on Curt and Sandy, at how they just like each other.  They meet and talk.  Get to know each other.  Heather, who turns out to be Sandy's roommate, rolls her eyes at the idea of spending any time with a cop--but later begins dating Doug.  That kind of seeming inconsistency (note the word "seeming") abounds, and of course feels familiar because it feels real.

But the meat of what follows is Curt and Sandy, his attempts to help her, even rescue her.  The often troubling details of his past, for which he feels shame--the crimes of his father, the long sickness of his mother, the grinding poverty.  She likewise shares the long slew of stepfathers and others who robbed her not-bright-at-all mother blind until Sandy left.  He has a harder time accepting her than she does of him.  It all comes to a head when Curt's well-off (she says middle class, upper middle class maybe--her family has mansions) fiancee Beth (Mia Marcon) comes back from a trip and pretty much explodes with indignant anger.

This becomes a crisis, when harsh truths emerge and harsher words end up spoken.  Not the stuff of violence or the supernatural, or even the mythic--although such remains my favorite.  But the kind of private crisis that results in instant, revealing choices.  What do you do when someone you care about is in vast trouble and helping them endangers you?  If you are habitually, almost painfully honest and have been trying to live a lie, what comes out of your mouth once the damn breaks?  When someone hurts you, what do you say?  Do you strike out?  How about if someone's pain makes you deeply uncomfortable?  What do you do when your life becomes one failure after another after another after another?

Now Rebecca Gilman's play (I've seen one other of hers, and it was awesome) does in fact turn out to be exactly what I thought--but without the cast directed by Paul Rush, that would not be that obvious.  Yet it is obvious, here.  Because--and please let me emphasize how fantastic this seems to me--every single cast member showed enormous skill as well as heart in the revelation of their talents.  Not a single gesture un-natural.  Not a single word spoken without truth.  Not once did anyone on stage 'zone out' waiting for their next line, but listened to what others said, then allowed themselves to react moment by moment.  This brings a script to life.  And the life of this script is indeed about the values we are embracing or rejecting as a nation.  More, it is about saving the world.  One soul at a time.  We dwell in veil of tears, wound up in chains of fear and desire, too often becoming greedy cowards in the process.  Yet in loyalty and compassion lie the antidotes of these twin plagues.

This play never once has anyone articulate what I just said.  Never.  But it breathes the truth of it with every scene.