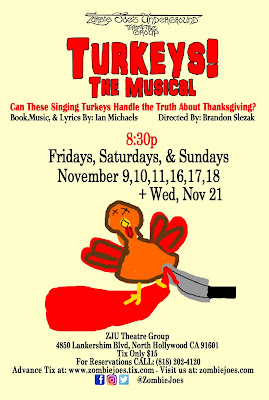 Just in time for Thanksgiving, Turkeys! The Musical from ZJU manages to tell a heart-warming tale full of zany laughs amid genuine existential horror.  Bravo to all involved!

Ian Michaels is the dark humorist behind this show, having written book, lyrics and music as well as portraying Jeremiah the patriarch of a small family of Turkeys in a farm.  He has gotten religion in a big way, often preaching about Turkey-Jesus and being ready for His Will.  His daughter Ezekia (Michaela Slezak) proves a fairly rebellious young bird, denying the existence of God.  From her we get the first real intimation of why her father become so faith-centric.  Just eleven months and twenty days ago, a thousand turkeys in this farm vanished, including Ezekia's sister Charlotte.

But where did they go?

At the same time, the farm ends up visited by a trio of wild Turkeys, males who set most (but not all) of the ladybirds a flutter with excitement.  The most hilarious exception, Margarite (Jetta Juriansz) feels a deep frustration at her life, longing for more, even fantasizing about being Icaris to fly up to the sun.  Even if she died, that she sings, would be worth it.

Eventually Ezekia and Margarite literally bump into each other, starting an argument that turns into something much more.  The song, "Love at First Cluck" gives some hint about the style here.  Puns, double entendres, just plain silliness as we see characters gobble at each other in affection and peck at food--all this to songs that manage to be sweet and kinda weird/almost deep at the same time.  Now take all that and recall who these characters are.  Turkeys.  At a turkey farm.  In late November.

This is where the whole thing gets a tiny bit brilliant, combining as it were Rogers & Hammerstein's Carousel with George Orwell's Animal Farm.  We get adult fare not just childish fun, starting with the sexual frustration of Ezekia's mom Patricia (Gina Rizzo Bishop) who ends up teaching two of the young Wild Turkeys (Nikk Alcaraz, David Dickens) a thing or two, to the way Christine (Lauren Adlhoch) so totally falls for Eric the Wild Turkey (Jason Britt) and he for her so hard they seek to protect each other, and of course Rooster's (Dakota West) down home complacency at knowing the truth of what happened to Ezekia's sister.

I hope this show gets revived and/or produced anew, complete with the emotionally complex--i.e. both dark and hopeful, horrific yet romantic--conclusion.  It deserves it.  Because this delightfully zany musical demonstrates nicely the George Bernard Shaw quote so very well, namely "If you tell people the truth, make them laugh, or they will kill you."  Because never forget this musical is all about monsters, gigantic monsters who come in the night to kill and devour our beloved heroes, their friends, their families, everyone they know.  And the monsters are actually in the theatre every single second of the show.  Then after the show, we leave and go home.