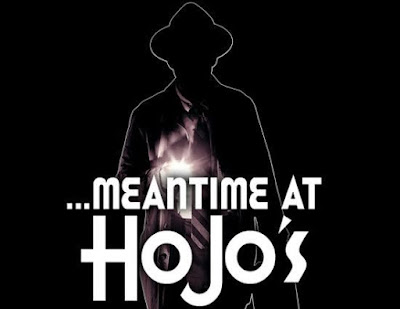 The Watergate burglary barely made a ripple in news reports when it happened in 1972.  That seems amazing now.  But ...Meantime at HoJo's by Christian Levatino takes that moment--which in hindsight seems like a crack revealing a bizarre backstage of history--and turns it into a human story of drama, tragedy and dark humor.

Our players went down in history as the Plumbers, a group of semi-professional covert ops veterans who see their job as saving democracy and Christian civilization from the horror of North Dakota Senator George McGovern being elected President.  In retrospect of course we know this danger was so great McGovern carried exactly one state out of fifty.  The leaders of this team are E.Howard Hunt (Darrett Sanders) and G. Gordon Liddy (Levatino).

What we follow then are a team of odd individuals, played very well by Patrick Flanagan, Scott Mosenson, Isaak Gracia, Adam Duarte, Jon Fusion and Hank Doughan.  The dynamics between them prove compelling and even fascinating, as the (in hindsight) clearly deluded team go all out in trying to uncover dirt and/or secrets about the Democratic National Committee.  All three plays of The Big Event (a trilogy which will eventually become a tetrology) fairly drip with irony.  Here we find no exception.  In fact these agents manage to uncover their own side's "dirt" and in the process help force the fierce Cold Warrior Nixon out of th Oval Office. 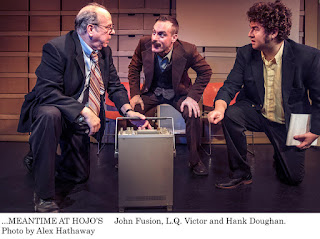 But mostly the play focuses on their interactions as we can see both their fears and complacency play out against what we know is coming.

Now here I will posit two criticisms against what is in nearly every way just an excellent piece of theatre.  One must be only visceral, because in truth we are discussing history and there were no women among the Plumbers.  Indeed, the 1970s lest we forget saw no shame at all in what we rightly today see as pretty firm, proud and entrenched misogyny.  So let that one pass.   It is telling the truth of those times.

Less easy to wave away is a premise behind the play, one referred to often and which helps  link it to the other two plays of the trilogy, especially Sunny Afternoon.  Simply, the play seems to be furthering the theory that the Watergate Plumbers were in fact the assassins of John F. Kennedy.  Honestly, I will no more debate this question than I would Creation Science, Holocaust Denial, or the Flat Earth.  I hope this inclusion is meant as a mere dramatic device, but frankly I am unsure.  This displeases me, because I am usually good at picking up on such 'signals' and these three plays seem too well-constructed to miss it.  So.  I frankly disapprove very strongly of such nonsense in terms of our current political climate, and in the face of very firm evidence (on top of what seems like an unbelievable coincidence).

Yet--the play remains a compelling story of interesting, even sympathetic characters with a darkly humorous insight into real history.  That needs saying first and last.