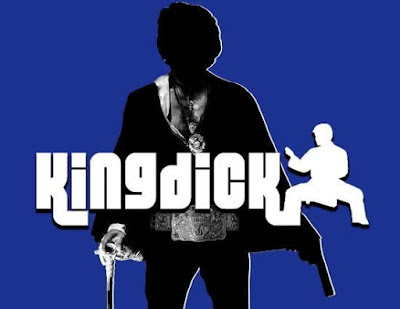 For those of you who don't know, Elvis Pressley walked up to the White House one day and asked to see President Richard M. Nixon.  More, he was (eventually) let in to meet the President in the Oval Office, to have some photos taken.  "Tricky Dick" it turned was something of a fan, and gladly granted the "King's" request for a Federal Drug Enforcement badge.

To add to his collection, he said.

Yeah okay.  Whatever.  From this little known snippet of history, Christian Levantino (who wrote, directed and plays Elvis) wove together an ever escalating political farce.  Honestly, there were times I had trouble breathing.  Every single word, it seemed, as well as every action seemed to spiral more and more into a delicious craziness.  Fairly early on, it doesn't even surprise when the very drug-addled Elvis starts to have a long debate with his long-dead twin Jesse (Darrett Sanders).  From there the machinations of minor White House aides (Derek Manson and Andy Hirsch)  over whether to let Elvis in, why, whether to tell the President about Daniel Ellsberg and what will soon be called The Pentagon Papers, up to and including Nixon's reaction to learning Elvis wrote him a letter, then beyond.  Honestly, it made for a surreal snowball of ever-faster and ever-larger absurdity that kept me roaring with laughter. 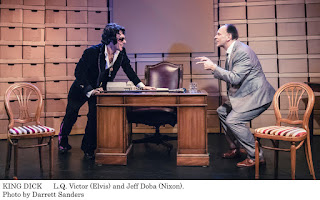 Turns out the two of them have lots in common, other than a nickname and world fame.  Both have exactly two aides who appear on stage (Patrick Flanagan and Keith Stevenson  like everyone else giving top notch performances) for example.  Both have trouble relationships with their wives and daughters.  Both are fairly conservative politically, and of course both prove deeply paranoid.

It does turn out a coincidence both of them are high as kites during the actual meeting.  Jeff Doba as Nixon I really want to highlight as someone who avoids caricature in his performance--ironic, because the play remains a farce and pretty much everything in it is indeed caricature.

Honestly, I have nothing but praise for this wild glimpse of a bygone political era that sometimes seemed a kind of Cloud Cuckoo Land at the time--and now seems relatively normal.  But this play captures the dark zaniness which allows us to look at the horrible, the insane, the dangerous and dangerously self-rightous with guffaws of laughter.  Otherwise we might cry.

Quick note:  The almost silent role of the White House photographer added to it all with a fine performance from Spencer Cantrell.

The Whitehouse aides are played by Patrick Flanagan and Andy Hirsch. Elvis’s are Keith Stevenson and Derek Manson. Show times are Saturdays at 7pm and Sundays at 5:30. Thanks so much for coming! We are so happy you enjoyed the shows!!

A thousand thanks for the correction! I have edited the text in response!