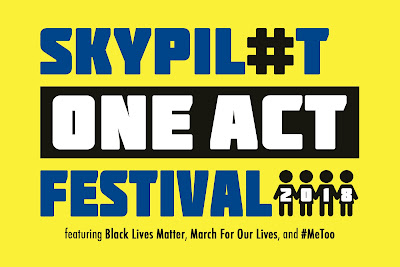 One nice advantage of attending the Panel of Critics for Better Lemons proved meeting more people in theatre!  And they invite me to shows!

The Skypilot Theatre ended up a case in point.  Their One Act Festival 2018 just opened and they very kindly gave me a ticket to attend!

Now, these days "one act" often is short hand for "ten minute plays" and this is no exception.  Their festival including a playwriting contest, asking for works inspired by three hashtags:  #Black Lives Matter  #March For Our Lives and #Me Too.

I attended Series A of their festival, consisting of three small plays:

Class Reunion blended comedy and pathos with a genuine punch in the gut.  Regular readers will probably realize that is compliment coming out of this keyboard.  Playwright Tom Misuraca crafted his tale around the stuff of cheap but very human laughs--a class reunion.  How have people changed, how do they feel about that change, why do they come here anyway i.e. what are they looking for, etc.  Gina (Kelly Goodman) shows up overweight and acutely self-conscious, getting a series of surprises as her classmates show up:  Alyssa (Patricia Mizen) who was a bit of bitch in high school but has grown up out of it.  Alex (Terry Woodberry) has aged gracefully amid success and happiness, while Gina's ex Martin (Jono Eiland) is no less good looking but has proven to be a very fine man in many ways.  Initially we think all this a bit of humor at Gina's expense.  Until they start discussing their classmates who died.  Start remember the day.  When the gunman came.  When lives were taken, destroying whole futures.

I really like how this playlet was set up, but it heightens the problem I have with ten minute plays.  This is too short.  tI deserves more time.  The situation and characters seem to demand an hour or so at least to really explore what Misuraca created.  I hope very much he expands it, because this is an extremely promising beginning.  Hopefully someone will give him the chance and produce this as a longer work.  The cast and director (Margaret Starbuck) can come back and knock my socks off, instead of teasing me with this flower begging to become a garden.

The Assault(s) by Marilyn Barner Anselmi on the other hand is only a seed, one that could become tree or small forest but only a seed for now.  Right now, it is little more than a situation, with a few very good lines exchanged between three almost-characters.  The cast and director (Kristina Lloyd) did all the could but they had to fill all the missing pieces by themselves.  Tonya (Marissa Kimble)  lets herself be dragged by her friend into a painful, even humiliating task that needs doing for oh so many, many reasons.  Shel (Elizabeth Clary) pretty much understands that, at least in her hyper and over-talkative way.  Mrs. Withers (Taylor Hawthorne) listens, persuades, even cajoles in an effort to get Tanya to tell her story--which as one might have figured out by now involves sexual assault.

Yet we have almost no specifics here.  A few very tiny clues, but for example why are Tonay and Shel even friends?  No idea.  Likewise almost everything I understand about Mrs. Withers came through the actor--which did not prove enough.  I criticize not the cast, not at all.  In fact they impressed me with how much they brought to the table!  But this is not a play.  It is a seed of a potentially very powerful play, a story akin to Ibsen.  I really hope Anselmi writes it.

This is Not a Drill isn't really a "play" either so much as a reader's theatre.  Clearly intended not to ask questions but to scream answers we should already know but aren't giving near enough weight, writer Nick Freedson accomplished just that.  He seems to want to stir up indignation, to inspire and hopefully enrage.  Kudos to him.  The cast--Sof Puchley, Sri Chilukuri, Marissa Kimble, Emma Pasarow, and Alyssa Marie Klein--demonstrate the energy and intense passions of youth.  Well, they are playing people very young--the victims and shooter in a school massacre, as well as the single survivor.  While I think this might make a good play, what it is instead works well, certainly as a piece of theatre intended to wave a flag, march in protest, yell truths we should already know. As I write this, another mass shooting took place here in the greater Los Angeles area.  Yeah, this works.  It says something loud, clear, and full of human need, calling upon us to obey that human need.  So--good on them all.  Well done.