The Woman Who Went to Space as a Man (review) 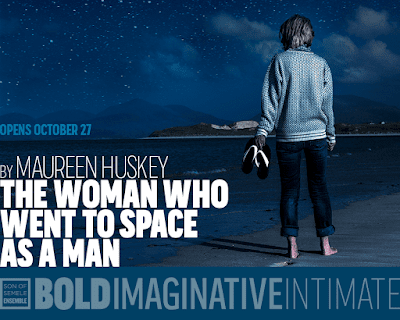 You may or may not be familiar with the science fiction author James Tiptree Jr., but "he" was a trailblazer in many ways, helping forge the genre into something both exciting and very adult.  Via a plethora of short stories and a few novels Tiptree dealt with issues, often fundamental and disturbing ones, asking questions to which no easy answers seemed available.  But a lot of the furor of Tiptree's life focused on the fact everyone knew this was a pseudonym.  Eventually a startling truth emerged, i.e. James Tiptree Jr.'s true identity.

He was a woman.

Alice Bradley Sheldon, the "real" Tiptree, emerges as the subject of The Woman Who Went to Space as a Man, a musical taking place in her mind--blending memories and dreams, impressions and ideas to create if not necessarily coherent nevertheless a compelling and deeply informative whole.

Mesmerizing in fact.  Maureen Huskey's (who both wrote and directed) show eschews any mere recitation of facts in favor of exploring Sheldon's psychological life.  How many wild, wonderful details (like donning ruby slippers at one point--or the tangled ropes/threads forever present and forever used by the characters in so many inventive ways) are in the script versus created by the production never becomes clear.  Nor frankly does it ever matter.

We meet Alice as an adult (Betsy Moore) , a child (Isabella Ramacciotti) and a young adult (Paula Rebelo)--with the first looking back, all the way to her Africa-exploring mother Mary Bradley (Anneliese Euler) who had such specific expectations of her brilliant offspring.  Expectations Alice more-or-less reluctantly met, partially in an effort to simply be brave.  A recurrent theme in both life and writing, this.  Life forever seemed hard, complex, in many ways baffling.  How glorious, that her mother seemed strong enough to simply go forward and conquer!  Alice took a more baroque path.

Rising to a WAC Major in WW2, she seemed to seek out danger and meaning as much as any kind of duty.  Although clearly sexually interested in--and quite capable of attracting, if not keeping--women (Emma Zakes Green, Ashley Steed), she fell in love suddenly with a much older male officer named Sheldon but whom she dubbed "Ting" (Alex Wells).

All of that, though, remains (very interesting) biography in terms of events and dates.  The Woman Who Went to Space as a Man focuses on the internal difficulty Alice suffered living in a universe stunningly beautiful, baffling and all too often petty.  Eventually as she begins writing science fiction, she creates that alter ego James Tiptree Jr. (James Ferrero) , a dashing and hyper-masculine entity with whom she can create stories bubbling in her mind.  Traveling all along this journey, though, like Virgil with Dante in The Divine Comedy, is an alien female presence, a character from her last work, Mira (Megan Rippey).  Part muse, part inner self, maybe the anima to James' animus, all of these and none, Mira leads Alice on a trip towards understanding herself.  Not everything, of course, but the essence.

In this kind of dreamscape, one doesn't have to justify the songs characters break out into, not at all.  They emerge as naturally as a tune one remembers for no immediately obvious reason.  Yet to call it stream of consciousness doesn't really work.  Here is a story with direction, purpose, even a target which may shift but the show's aim remains true--and that target is the also the hero.  Or heroes, since we have three, all of them the same person.

But then, so are at least two other characters.  All five, Alice aka James aka Mira aka Alice again and more yet to be?    Maybe.