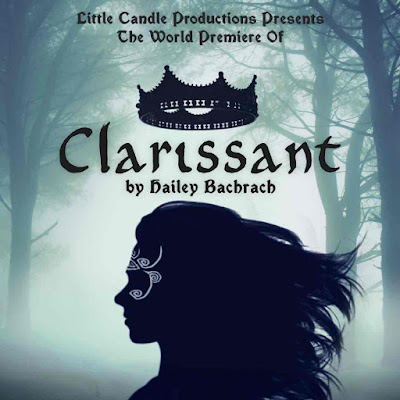 Much as I love the tales of King Arthur, truth to tell I've seen very nearly no dramatizations of it that gave me much joy.  Some novels, yes.  Movies?  No, except maybe Monty Python and the Holy Grail (which got a surprising amount right).  But theatre?  I cannot think of any.

Now, the story feels compelling enough.  After the fall of Camelot and wars rack what was once a united England, Clarissant (Paula Deming) finds herself the Queen of the Orkney Isles.  In theory.  But something holds her back from even considering a desire to take that throne.  She grew up here, and firmly believes their mother cursed her brothers, dooming Camelot and Arthur's dream.  But did she curse her daughter?  If she did, then to claim that crown will doom this land beyond hope.

Of course her sisters-in-law, widows who have come here for surcease and haven, insist the foolish Orkney Lords will destroy it anyway if left to themselves.  To their surprise Lynette (Linzi Graham) and Lyonor  (Karissa McKinney) find themselves joining Clarissant on a quest back in time, to trace the skein of Morgause's mind and plans, the tragedy of what befell their family in painful detail.

The playwright crafted a wonderful set of characters, making many of these figures vividly alive and individual, rather than the cut-out figures one so often sees.  So thus the tragedy becomes personal rather than abstract.  It isn't about a battle or a dynasty or the failure even of a noble dream.  Rather, it is about guilt and personal loss.  About human beings who make choices which in hindsight seem so full of horror, yet at the time feel and felt totally justified, even maybe wise.

How such a story comes to be told, proves as important as events.

Using the magic of her family, of her mother and grandmothers, of her aunts and great grand mothers, Clarissant allows the past to come back and spill into the present.  The characters are many, with the five brothers taking on many roles, including Guenevere and Lancelot, King Arthur and even Morgause herself.  This means (in this production certainly, although it might easily be part of the script) an all female cast.  A nice emphasis on the idea of seeing the history through a different set of eyes.

And I cannot emphasize enough how director Allison Darby Gorjian and the whole cast so wonderfully meet their challenges.  Every single character displays a startling range of nuance, conveyed in an array of body languages, voices, sometimes costume but mostly via intention.  As a result even when one actor plays two knights we know which is which within seconds, sometimes less.

All of this in service to a story, a personal quest not for a grail or some magic sword, but for something less tangible, yet more obviously useful.  A young woman of great intelligence finds herself seated on her homeland's throne.  What she needs most is some clue what do there.

Well, do we not all desire as much?  Is that not what myth and legend is all about?

All performances of Clarissant are pay-what-you-can.

Performances are Thursdays, Fridays and Saturdays at 8pm, Sundays at 2pm, at the Atwater Village Theatre 3269 Casitas Avenue, Los Angeles 90039.