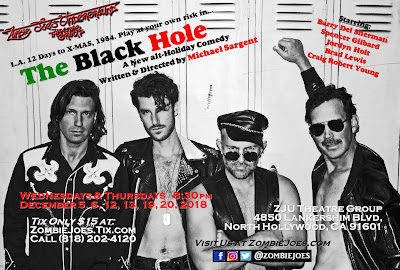 Dark humor can be like threading a needle while tap-dancing.  Honestly I have seen many attempts which simply did not work.  More, this cannot help but prove personal, very personal.  Haven't we all had that experience of feeling not the slightest impulse to smile while other around us laughed their heads off?

So what follows is a personal reaction.  Read it carefully, to learn whether The Black Hole by Michael Sargent is your cup of tea.  Or cocaine-laced scotch.  Take your pick.

The title refers to a gay club in 1980s San Francisco, one dedicated to excess in many forms, complete with a dimly lit maze within which one can get lost (and see things that might shock).  Here a young man named Turk (Spencer Gilbard) comes looking for a job.  The owner, one Fred West (Barry Del Sherman) deadpan with an edgy melancholy, hires him and clearly this is because he finds the young man attractive.  His boyfriend/business partner Joey Aspen (Craig Robert Young) clearly recognizes this as well, but their relationship is...well, complex.  As becomes increasingly obvious.

What follows is dark humor spiraling into ever greater darkness and hilarity.  Not only in terms of jokes or simply funny lines--although some of those almost shocked me!  My fave, equal parts camp and perversion while utterly revealing of more than one character, must be Joey's complain about Fred's drinking getting out of control  "When you pee on me, I want it to be with intent!"

And I just kept laughing!  Even when my eyes popped or my jaw dropped at some casual mention of perversion, corruption, kinky gossip, or uber-jaded suggestion--I laughed.  Sometimes I squirmed, and there was even a moment near the end when my flesh crawled a little bit.  This involved Turk's wife Bambi (Jordyn Holt) whom up till now no one believed it, until she shows up looking for him with news.  But even that savage bit of darkness still felt funny!

So let me praise the skills of cast and writer/director alike.  Even telling one joke requires a precise set of timing.  Milking one joke for nuance proves a whole 'nother level.  To live in a comedic world successfully for an hour or more, as an ensemble, that ups the game one more time--one reason so many full length comedies use such obvious, formulaic humor (and it can still fail all too easily).  But to do all that while straddling the often razor-sharp line between laughs and horror (or shock, or disgust, or even mere queasiness) takes precision plus skill.  That is what this cast manages, and another way you can tell how well they are managing it is the lack of frenzy.  You know that old joking piece of advice in theatre "Faster! Louder! Funnier!"?  Well, that has proven a way to make things funny!  More impressive is a slow burn, the pauses and silences not empty but waiting, pregnant with unease, first from uncertainty and then from anticipation.