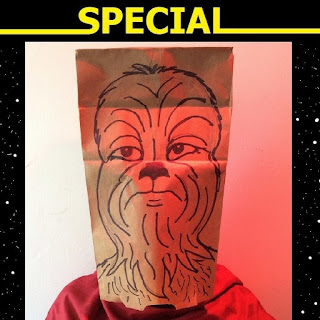 For those of you who don't know, in the wake of the very first Star Wars movie back in the 1970s, a Thanksgiving special was produced and was aired exactly once.  It had problems, so many that George Lucas exerted a great deal of energy preventing it from ever being aired again.  He sought hard to prevent it ever from being seen.  Certainly no official VHS or DVD was or is forthcoming.

Special by Andrew Osbourne is about the making of that special, about a train wreck of talent and skill and myopia as well as raw misunderstandings turned into a dark comedy, almost but not quite a farce.

The elements involved include about forty characters, all with different motives and viewpoints about the special, what it should have been, what they were trying to do. whether anyone should and/or who should be blamed and why.  Frankly George Lucas did not want to do this special, but when he came up with a framework for it, i.e. the Wookies celebrating a holiday called Life Day, the studio execs and others were baffled.  Lucas, deep in the heart of preparations for The Empire Strikes Back. wanted next to nothing to do with television and felt overwhelmed, especially since he was/is a control freak now in charge of a gigantic process/franchise of whom all his film director friends disapproved.

So the execs try to push on with a director who'd never worked with American television before and organized everything for a one camera film shoot, a diverse team of writers brought in who prepared things for Harvey Korman and Bea Arthur, over twenty minutes between the Wookies in which not a single word of English was spoken, Harrison Ford not wanting to appear in the thing at all, Carrie Fisher willing if she got to sing (and was high as a kite when she did), the director quitting halfway after they were seriously behind schedule and way over budget, so a new director was brought in from Disney (ironic huh?) only to learn there was no money left to build a major set...

The roller coaster ride involved uses six very talented actors to perform the forty roles, come of them commenting to the audience about what really happened, others playing everything from extras to nerds eagerly awaiting the special, to many of the execs and actors directly involved.  Paris Benjamin for example, plays Carrie Fisher (among others--this goes for EVERYONE in the cast), giving her quite a complex little internal story going on.  Other standouts include Lance Guest who is Harrison Ford as well as one of the directors, Rich Lehmann who is George Lucas, Marty Yu as Harvey Korman as well as two of the execs who are always together on stage--imagine the logistics of that!  Then there's Jennifer Hugus, whose largest role seems to be that of George Lucas' wife, as well as Alex Elliott-Funk, who plays a whole host of different characters--honestly, the sheer number is dizzying. I literally cannot recall all their names, even with the program in front of me.

Which is really a testament to the fact I knew who these people were during the show itself, even if I didn't catch their names.  Each performer walked on and after a while we know who they were by them simply walking on!  You can call this skill, you can call it good directing (by Kerr Seth Lordygan), or natural talent, stage presence, the result of practice.  Hardly matters.  Some combination of "all of the above" seems pretty clearly the answer.

Honestly, I'm not going to go overboard with praise.  Comedies notoriously prove tricky, and to be honest while I laughed more than once during the show, more often I was just smiling.  Having said that, let me know that smile was a pretty huge grin.  I did not know a lot of this story before, and that in and of itself kept my attention.  The cast achieved a real tour-de-force by creating a huge number of characters vividly.  An achievement worthy of praise!

But neither I nor the audience ever broke up with laughter.  But--more importantly--the show lost not one audience member at intermission, and never once was I bored or less than entertained.

Special by Ol'Bait Productions plays Thursdays, Fridays, and Saturdays at 8pm, Sundays at 5pm until January 13, 2019.  It will also have a special New Year's Eve performance on Monday, December 31 at 8pm.  All performances are that Theatre of Note, 1517 N. Cahuenga Blvd. (just north of Sunset), Hollywood CA 90028.